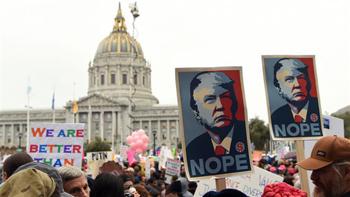 Most of protesters who have been arrested for marching against US President Donald Trump after his January 20 inauguration are facing 10-year prison sentences, federal prosecutors say.

A $25,000 fine is also awaiting the majority of the over 200 people who were arrested during Friday’s violent protests, where people started vandalizing public property as the Republican leader was being sworn in.

Police used tear gas, stun grenades, water cannon and pepper spray to subdue the protesters before arresting some of them on “felony rioting” charges.

Washington, DC law describes “felony rioting” as a situation where five or more people cause “serious bodily harm” or more than $5,000 of damage to property through “tumultuous and violent conduct and the threat thereof.”

All of the 217 protesters stood before the state’s Superior Court on Sunday.

Many of the arrestees were wearing anti-fascist “black bloc” hoods and masks when they were arrested. They are accused of smashing windows, throwing bricks at cop cars and vandalizing a nearby limousine.

At least one of the protesters told the court that he was a journalist for a news website and police should not have detained him.

According to the US Attorney’s Office, nearly all of the protesters have been released without bail. They should avoid being arrested again before going on Trial in February and March.

Upon leaving the police station, the protesters were met with a small group of protesters who were chanting “anti-capitalista” in their support.

People across the US and around the world held rallies to show solidarity with the massive Women’s March on Washington on Saturday, which reportedly drew over 2 million people  in US cities.

Over 630 different events were held in different cities from European capitals to Asian and African cities, where people urged the Trump administration to uphold women’s rights and avoid discrimination against immigrants and racial minorities.In Washington, half a million people descended on the National Mall and nearby streets Saturday for the historic march, eclipsing the turnout for Trump’s inauguration the day before, according to city officials.