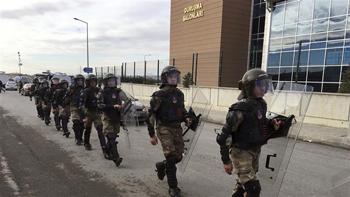 Turkey has sacked a deputy head of the TMSF state fund and sealed off two local television stations as Ankara intensifies a crackdown following a failed coup attempt last year.

Reuters cited the Official Gazette, the Turkish government’s official journal, as saying that the dismissal of Zulfukar Sukru Kanberoglu, of the TMSF fund, which runs seized firms, came after a decree issued on Monday.

Three other decrees also ordered the dismissal of some 366 other people from state institutions while reinstated 124 civil servants.

According to the report, they were sacked for being part of or connected to “terrorist” groups or groups that worked against national security. Ankara often uses the term terrorist group or organization to refer to the group of individuals who support US-based opposition cleric Fethullah Gulen.

The report did not clarify who or what government institution had issued the decrees.

On Saturday, Turkish prosecutors issued arrest warrants for more than 400 people, including soldiers and security officers, over alleged affiliation to the network of Gulen, whom Ankara accuses of having orchestrated the failed military coup.

Turkish-language Haberturk television news network reported that the suspects were being sought for using the ByLock mobile application, which the Turkish government claims to be the top communication tool among members of the Gulen movement.

Gulen has strongly condemned the coup attempt and denied any involvement in it.

Turkish officials say over 240 people were killed and more than 2,100 others injured in the coup attempt. Tens of thousands of people, including military personnel, judges, and teachers, have been suspended, dismissed, or detained as part of the post-coup crackdown.

According to figures by the Anadolu news agency, a total of 40,832 suspects have been arrested since the coup attempt.