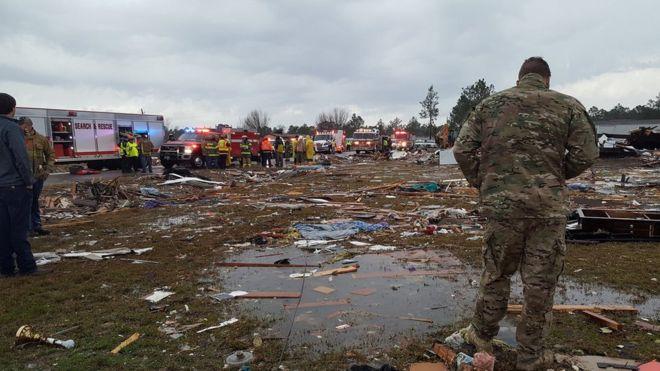 Severe weather has killed at least 18 people in the US South and injured many more, emergency officials say.

A state of emergency has been declared by Governor Nathan Deal in seven counties in south-central Georgia, where 14 people were killed.

Four more people were killed by tornadoes in Mississippi on Saturday.

More storms and a “tornado outbreak” are expected in northern Florida and southern Georgia, the National Weather Service says.

The Georgia Emergency Management Agency said in a news release that the 14 victims were in the southern Cook, Brooks, Dougherty and Berrien counties.

Most of the deaths occurred in Cook County, when a mobile home park was apparently struck by a tornado.

Cook County coroner Tim Purvis said numerous mobile homes had been “levelled” before dawn on Sunday in the park near the city of Adel. He said emergency teams were still searching for survivors.

Mr Purvis estimated that the park has about 40 mobile homes in total, and roughly half were destroyed.

“These storms have devastated communities and homes in South Central Georgia, and the state is making all resources available to the impacted areas,” Governor Deal said in a statement.

US President Donald Trump said he had spoken to Gov Deal and expressed his condolences for the loss of life.

Swathes of the south-eastern United States have been hit by storms over the weekend.

In southern Mississippi, four people died in the path of a tornado with winds above 218 km/h (136 mph).

More than 50 others were injured and about 480 homes were damaged, state officials said.

The National Weather Service (NWS) warned a “severe thunderstorm and tornado outbreak” was expected across north Florida and south Georgia on Sunday, with the “severe threat also expected to extend southward into central Florida and northeastward into South Carolina”.

The Georgia Emergency Management Agency issued advice on the best and worst places to shelter from a tornado late on Saturday, advising locals in the path of a tornado to cover themselves with blankets or a mattress for protection.