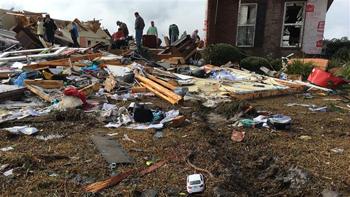 Severe weather has killed at least 18 people in the south-eastern US and injured dozens more, according to emergency officials.

Speaking on Sunday at the White House, US President Donald Trump pledged federal assistance for the severely affected states of Georgia, Florida and Alabama.

“The tornadoes were vicious and powerful and strong and they suffered greatly,” Trump said. “So we’ll be helping out.”

Georgia Governor Nathan Deal has declared a state of emergency in seven counties in south-central Georgia, where 14 people were killed.

The Georgia Emergency Management Agency said in a press release that the 14 victims were in the southern Cook, Brooks, Dougherty and Berrien counties.

Jalen Bennett lives about a mile from the park near a mobile home park in rural Cook County in southern Georgia, where seven of the 14 casualties occurred.

He said he was sleeping when a severe weather alarm sounded on his mobile phone at about 4:00 A.M.

“I woke up and I looked outside – it was just a lot of thundering and lightning, and it was real dark,” Bennett said. “I had to move downstairs to find shelter.”

Tornadoes have killed four people in Mississippi, according to authorities.

Residents near Sunshine Acres mobile home park said they experienced a few minutes of terror that one said felt “like a nightmare on Elm Street,” referring to the popular horror movies.

“As soon as I walked out the door, people were screaming, screaming for help,” said Phillip Gibbs, 24, who hid in the closet with five other family members.

More storms and a “tornado outbreak” are likely to hit northern Florida and southern Georgia, the National Weather Service said.

The storms were part of a weather system passing through southern Mississippi and Alabama.

The National Weather Service has warned of hazardous weather conditions in parts of Arkansas, Louisiana, and Mississippi, saying that severe thunderstorms with possibility of golf ball-sized hail, strong winds and tornadoes are likely.