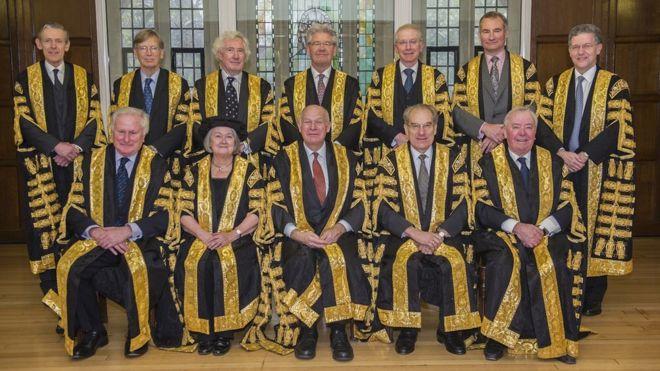 The Supreme Court will rule later whether Parliament or ministers have the power to begin the Brexit process.

The landmark judgement, to be announced at 09:30 GMT, will decide how the EU’s Article 50 exit clause is triggered.

The government argues that ministers have the power – but opponents say they need Parliament’s approval to start the two years of negotiations.

If ministers lose the appeal, they will have to ask Parliament to vote on legislation which triggers Article 50.

The outcome of the Supreme Court case, heard by all 11 justices over four days in December, will not overturn the referendum result but determine which course towards leaving the EU is lawful.

Prime Minister Theresa May has said she wants to invoke Article 50 – formally notifying the rest of the EU of the UK’s decision to leave – by the end of March, setting in train negotiations over the terms of the UK’s exit.

Lord Neuberger, president of the Supreme Court, will read out a summary of the court’s findings in a brief session expected to last five minutes. Members of the public are able to attend and will be allocated seats in the courtroom, as well as two adjacent rooms, on a first-come, first-serve basis from 09:00 GMT.

The case against the government was brought by investment manager Gina Miller and hairdresser Deir Tozetti Dos Santos.
What will the Supreme Court be considering in the Article 50 case?

Lawyers for the government argued that ministers could trigger Brexit under the Royal Prerogative – executive powers to make and break treaties. They added that Parliament had passed legislation for the referendum knowing what it could lead to – and hadn’t asked for the final say.

But lawyers for the government’s opponents said ministers had no power to change the constitution of the UK because only an act of Parliament could take away the rights and laws created during four decades of EU membership.

The case also heard arguments from Scotland, Wales and Northern Ireland about whether the devolved bodies had a say.

Two lawyers representing Brexit opponents from Northern Ireland argued that the process unlawfully picked apart key parts of the Good Friday Agreement which gave the EU a special role in the political bodies that emerged in the peace process.

If the government loses its appeal, it is expected to swiftly publish legislation asking Parliament to trigger Article 50, with the aim of it being approved by MPs and peers by March. Brexit Secretary David Davis is expected to make a statement to the Commons to outline the government’s next steps.

Ms Miller told the Guardian she hoped the government would come up with a “watertight” piece of legislation “to avoid loopholes that people can come back on”, adding that she was not trying to frustrate Brexit and the issues at stake were legal not political.

While Labour leader Jeremy Corbyn has said his MPs will be told to approve the bill because of the referendum result, there is speculation that dozens of them may rebel.

On Sunday, Scotland’s Brexit minister Mike Russell told BBC News there were no circumstances in which the SNP’s 54 MPs would back triggering Article 50.

However, the government is still expected to win a Commons vote with nearly all 329 Conservative MPs backing the move.

In November, the High Court rejected the government’s arguments regarding Article 50 but ministers opted to bring an appeal – saying they had a strong case and the Supreme Court hearing would also establish key points of constitutional law.