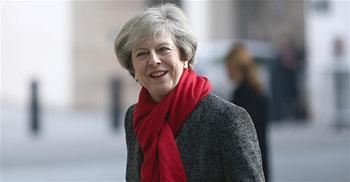 British Prime Minister Theresa May will visit Turkey this week, with the agenda set to focus on ongoing settlement talks in Cyprus, international efforts to defeat the Islamic State of Iraq and the Levant (ISIL), and bilateral ties between Ankara and London as Britain prepares to start Brexit negotiations.
May is expected to visit Turkey on Jan. 26 or 28, diplomatic sources told the Hürriyet Daily News.

The trip comes amid the ongoing series of talks in Geneva for a settlement in Cyprus, with Ankara voicing disappointment on the recent stance of the U.K., which has been a guarantor country in the dispute for decades.  Following a five-party conference on Cyprus in Geneva on Jan. 12, a working group with the participation of the three guarantor powers met in Mont Pelerin in Switzerland on Jan. 18.

British fighter jets under the U.S.-led anti-ISIL coalition conducted air strikes in northern Syria on Jan. 18, the Turkish military stated, marking the first coalition air strike in a long time after criticisms of Ankara toward the coalition forces for failing to support Turkey’s struggle against the jihadist group in Syria.

Turkish forces and Ankara-backed Free Syrian Army (FSA) fighters have been battling to capture al-Bab from ISIL as part of the ongoing Euphrates Shield operation for more than one month and fierce clashes in the region have led to casualties from Turkish troops and FSA members.

British Foreign Minister Boris Johnson visited Ankara in September to express solidarity after the failed July 15 coup, following a series of his controversial references to Turkey during the U.K.’s referendum campaign to leave the EU.