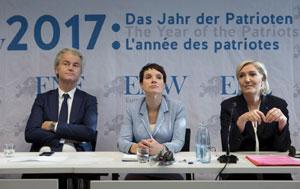 Populist leaders came together in Koblenz, Germany, to celebrate the “year of the Continental peoples”

After a few weeks of reading online about Donald Trump’s transition to the presidency, Marco Kopping, a 36-year-old apprentice at a car-parts supplier near Frankfurt, decided to get involved in German politics. He had never sympathized with a political party before, let alone joined one. But in December he received his glossy membership card from Alternative for Germany (AfD), one of the far-right movements now riding the updraft from Trump’s ascent. What drove him, Kopping says, “was the feeling of a revolution.” He didn’t want to be left behind.

Across the European Union, politicians on the right-wing fringe have been invigorated by Trump’s victory, which has given them a chance to attract new supporters, build coalitions and argue that, despite the often-glaring differences between them, they are all part of a movement with seemingly unstoppable momentum.

The most striking proof yet of that movement came on Saturday in the cross-section of far-right populists who met for the first time, at the AfD’s invitation, at a convention in the German city of Koblenz. A day after Trump’s Inauguration, the stars of the European right drew a direct line between Trump’s success at the ballot box and their own looming electoral battles.

“In 2016, the Anglo-Saxon world woke up,” said Marine Le Pen, the National Front leader currently favorite to become France’s next president, referring to Trump’s victory and the British vote to leave the European Union in June. “In 2017, I am sure that it will be the year of the Continental peoples rising up,” she said to raucous applause.

The speech was the first Le Pen has ever delivered to an audience in Germany, whose right-wing leaders had previously avoided associating themselves with her more radical and xenophobic positions. But on Saturday she shared a stage with AfD leader Frauke Petry, signaling to the world they are now on the same team.

Taking the podium by turns, leading political upstarts from France, Germany, Italy, Austria and other European nations stuck to a strikingly similar message for their audience of roughly a thousand delegates. They raged against the globalist elites, the European Union, the media and, in particular, the millions of Arab and African immigrants whom they accuse of threatening European culture.

Just a few years ago, such rhetoric would have confined these voices to the margins of European politics, especially in Germany, whose history with fascism has long provided a level of resistance to the allure of nationalism and identity politics. But today, buoyed by Trumpism, their message has entered the mainstream.

Two of the party leaders at Saturday’s event – Le Pen of the National Front and Geert Wilders of the Dutch Party for Freedom – are leading in the polls ahead of elections scheduled for this spring. The Austrian Freedom Party, whose two top leaders skipped the event in Koblenz in order to attend Trump’s Inauguration, narrowly lost a presidential race last month, even though the party’s founders in the 1950s were former officers of the Nazi SS.

“We all stand for the same things,” the party’s representative at the event, Harald Vilimsky, said from the stage on Saturday. “And if Trump is the winner, we are also winners.”

The new U.S. President has gone out of his way to encourage his admirers in Europe. The first foreign politician he met with after winning the election in November was Nigel Farage, the populist leader of the United Kingdom Independence Party, which drove the British vote to leave the European Union. In an interview last week with two European newspapers, Trump echoed the attacks that European nationalists have leveled against their favorite bugbear, German Chancellor Angela Merkel, calling her immigration policy “catastrophic.” He also predicted that other E.U. members would follow Britain’s lead in breaking away from the bloc.

With at least 11% support in national polls, the German hosts of the event in Koblenz are not likely to achieve their own referendum on E.U. membership any time soon. But they are almost certain to enter the federal legislature after the September elections, becoming the first far-right movement to do so in Germany since the end of World War II. Though they have little chance of entering the government, the AfD has already succeeded in pulling the political center of gravity sharply to the right. In response to the party’s growing popularity, Chancellor Merkel has been forced to back away from her openness toward Muslim immigrants, even calling for a partial ban on the face veil that some conservative Muslim women wear.

“They’ve managed to create a public discourse that I thought was impossible here,” says Sylke Tempel, the editor of the Berlin Policy Journal, referring to the AfD. “You feel it in the little things, the use of language, the way people have started to talk.”

One case in point took place about ten minutes into the summit on Saturday, when the crowd turned on the attending journalists and began chanting ‘Luegenpresse!’ – “lying press” – a term first popularized by the Nazis and, in the last couple of years, revived by European nationalists as a means of vilifying the media. Some of Trump’s supporters also adopted the term during his campaign rallies.

Petry, the AfD leader, has likewise called for Germans to start using the word völkisch again, a racist dog-whistle term for the uniqueness of the German folk that once graced the masthead of the Völkisch Observer, the official newspaper of the Nazi Party. “We need to work on giving the concept a positive connotation again,” Petry told the weekly Welt am Sonntag in September.

Another leader of the AfD went further last week in the effort to expunge what the far-right likes to call Germany’s “guilt complex.” During a speech in Dresden to members of the party’s youth group, Björn Höcke suggested that the Holocaust memorial in the center of Berlin was a “monument of shame” that had no place in the heart of a proud European capital. “This laughable policy of coming to terms with the past is crippling us,” said Höcke, who leads the party’s branch in the state of Thuringia.

The remarks, which caused outrage across the political spectrum in Germany, did not sit well even with some of the AfD’s other leaders, including Petry, who delicately tried to disavow them on Saturday. “All phases of history should be viewed critically,” she told reporters in Koblenz when asked about the matter. “But ultimately we should still feel good about ourselves.”

It was another sign of the rifts that have plagued their movement. Not only on the German right but also among its fledgling alliance with Europe’s other populists, there are often quarrels over key issues of policy and ideology. On economic matters, for instance, the National Front in France leans hard toward socialism and protectionism, while the AfD has its roots in free-market capitalism.

The United Kingdom Independence Party, the right-wing movement that drove the British vote to leave the E.U., has pointedly kept its distance from the more hardline views of Le Pen’s National Front. It did not send a representative to the event in Koblenz, and Nigel Farage, the long-time leader of UKIP, has said he would not endorse Le Pen in the French presidential race. “I’ve never said anything negative or nasty about Marine,” he told TIME in late November. “But I’ve never said anything nice about the Front National. That’s pretty much my position.”

Speaking to reporters during Saturday’s gathering of European populists, Le Pen tried hard to play down the differences between the various groups. “We want to make our own choices. We want to regain sovereignty. The rest doesn’t matter,” she said.

What matters to them now is maintaining a sense of unity behind the idea that their time has come, and Trump’s victory has made that a lot easier. “Yesterday you got a new America,” said Kopping, the AfD member, at Saturday’s event. “Now we want a new Europe.”