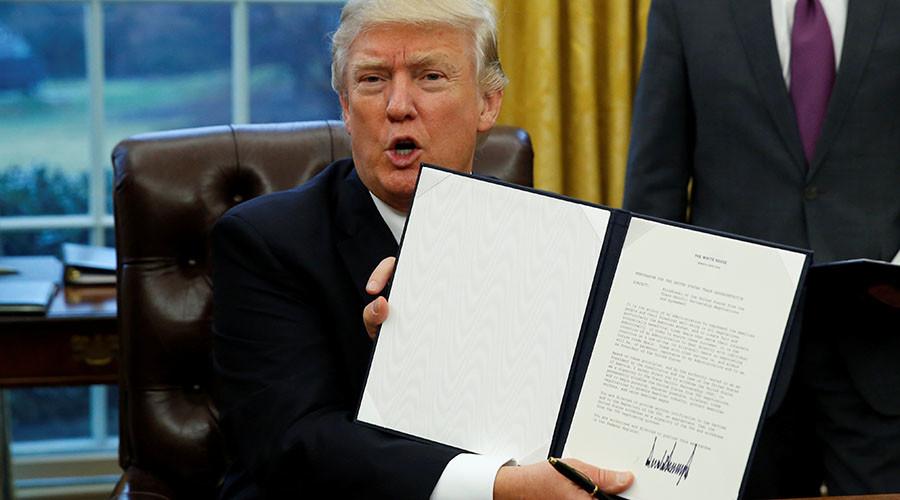 President Donald Trump is being commended by former presidential candidate Senator Bernie Sanders (I-Vermont) as well as some Democrats facing tough reelection campaigns, following his executive order removing the US from the Trans-Pacific Partnership.

“I am glad the Trans-Pacific Partnership is dead and gone,” Sanders said in a statement Monday.

The self-declared democratic socialist campaigned hard to keep Trump out of the White House, stumping for Hillary Clinton despite a fierce primary battle that included a biased Democratic National Committee. But since the election, Sanders has expressed openness to working with Trump, whom he agreed with on his populist opposition to global trade deals.

“For the last 30 years, we have had a series of trade deals – including the North American Free Trade Agreement, permanent normal trade relations with China and others – which have cost us millions of decent-paying jobs and caused a ‘race to the bottom’ which has lowered wages for American workers,” Sanders said Monday.

“If President Trump is serious about a new policy to help American workers, then I would be delighted to work with him,” he added.

This political alliance may be brief and coincidental, but Sanders has a reelection campaign in 2018 to consider. The two-term senator won handily in 2012 with 71 percent of the vote, and Vermont went for Clinton in 2016, but some Democratic senators who have also come out in praise of Trump over TPP are not in as comfortable a position.

Democratic Senators Bob Casey of Pennsylvania and Tammy Baldwin of Wisconsin both saw their blue states go red for Trump, a first in decades. They also both face reelection in 2018. Senator Baldwin tweeted Monday: “Withdrawing from #TPP & moving to renegotiate #NAFTA are good 1st steps from @POTUS, but more must be done to keep his word to WI workers.”

“I support President Trump’s issuing of an executive orders that will pull the U.S. out of the Trans-Pacific Partnership (TPP) and his recent steps to renegotiate the North American Free Trade Agreement (NAFTA),” Casey said in a statement Monday. “NAFTA has adversely impacted middle class families in Pennsylvania and the TPP would have cost jobs and hurt income growth, which is why I voted against fast tracking the deal in 2015.”

All political rules went out the window when it came to Trump’s campaign for president. Only time will tell if any more are broken, as the midterm election season creeps up.