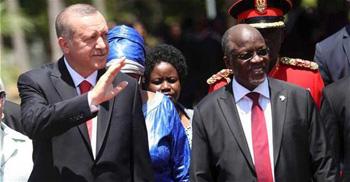 The Gülenist network is a threat not only to Turkey but to all the countries in which it operates, Turkish President Recep Tayyip Erdoğan has said during a state visit to Tanzania.

Speaking at the Tanzania Business Forum on Jan. 23, Erdoğan underlined the prevalence of the Gülenist network in different regions of the world, “hiding behind the notions of humanitarian aid, education, and trade.”

The group is “not only a threat to Turkey but to all countries in which it has activities,” he said. “We know that this sneaky network has arms in Tanzania. We have discussed the required measures with the president. I will ask a favor from you. Do not pay attention to any establishment, especially businessmen’s associations that have the name of ‘Turkey’ but do not have any ties to us and have not been recognized by our embassy,” he said.

“The biggest problem of the world currently is terror. Therefore, we should take measures against this terror altogether. ‘Soft terror, hard terror’ … We should never come to this plot,” said Erdoğan, adding that he believed Tanzania would take “much different measures” in the upcoming period against the Gülenist network.

The Gülenist movement is accused of perpetrating the July 15, 2016, coup attempt in Turkey.

Meanwhile in Greece, the country’s Supreme Court said it would deliver a verdict on Jan. 26 as to whether or not to extradite eight Turkish soldiers who fled to Greece in a helicopter after a failed military coup in July, the Athens News Agency reported.

Turkey alleges the men were involved in the July 2016 failed coup attempt and has demanded their swift extradition.

The men, who deny the accusations and have requested asylum in Greece, say their lives would be in danger at home where authorities are purging large numbers of people from the armed forces and other state institutions. They appeared in court on Jan. 23 but the ruling was postponed until Jan. 26.

The case has exposed often tense relations between Athens and Ankara, NATO allies at odds over issues from Cyprus to islets and air rights over the Aegean.