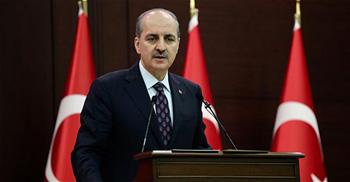 A solution at the Syria peace talks in Astana should not be expected in a day or two, Deputy Prime Minister Numan Kurtulmus said Jan. 23 after a cabinet meeting.
“There are parties that have been at war with each other for six years sitting around the table in Astana. We are hopeful about the process. Parties that have strong opposing views will get to a point of negotiations as the talks continue,” he said.

The talks taking place in the Kazakh capital commenced on Jan. 23 after a series of cease-fires were brokered by Russia, Iran and Turkey. The two-day meetings will be participated by the U.S. and representatives from the U.N., seeking to bring Syrian government representatives and rebel factions together.

Kurtulmus stressed that Turkey was expecting positive contributions from Russia, Iranand the U.S. and an active participation from U.N. representatives in order to achieve copious results.

“Almost all of the countries attending have de facto presence in the field. They either have bases or ground troops deployed. Let Syria define its own future. All foreign elements in Syria should retreat,” he said.

He stated that Turkey defended a permanent and just solution in Syria, where Kurdish, Arab and other components would be included.