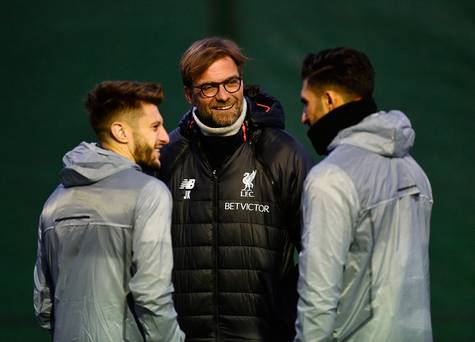 Jurgen Klopp organised a player summit following Liverpool’s title setback against Swansea in an attempt to galvanise the club ahead of a defining week.

Post-match debriefs are common at Liverpool‘s Melwood training ground, but the review of the weekend defeat had a more calculated and serious tone.

Klopp usually addresses his players for five minutes in the dressing room before a recovery session a day after a match. He spoke to his squad for over half an hour in the club’s media room on Sunday, with a formal presentation showing the deficiencies and qualities of his team over recent weeks.

He demanded improvement but also reminded his players how well they have performed to ensure the target that was set last summer is still attainable.

It was the first time this season the German coach felt compelled to meet with his players in this way, and a direct response to the negativity he sensed around the club even before the loss to the Welsh side.

As Klopp spoke to his players, the hierarchy moved to ensure there is at least one positive development this week as they opened talks with Philippe Coutinho about extending his contract. The Brazilian has three years to run on his current deal.

His return to fitness is pivotal for the rest of the season and owners Fenway Sports Group recognise his value to the club.

Liverpool play Southampton in the second leg of the EFL Cup semi-final at Anfield tomorrow, welcome Wolves in the FA Cup fourth round this weekend, and then host Chelsea on January 31 in a fixture critical to their fading title aspirations.

Although Klopp wants more from his players – particularly defensively -he sought to raise spirits, having seen the gap to the Premier League leaders increase to 10 points.

“We had a long meeting after the game so I am ready for the rest of the season,” said Klopp. “It was a football meeting with a few other parts of the game. It was because the goals we have conceded in 2017 have been a bit of the same story. It’s not that teams create a lot of chances against us. But usually, they don’t create a lot and still score.

“So we spoke about this and a few other things. It’s about enjoying the role we have. We are Liverpool, and a really good football-playing side, and we don’t enjoy the job we have to do? In our job, in 70 to 80pc of all games, we are dominant. So we have to enjoy this.”

Klopp is facing his first serious challenge since becoming Liverpool manager, with the expectation levels that escalated after such an encouraging start to the season now being overwhelmed by fatalism as the reality has dawned they are unlikely to catch Chelsea.

The Liverpool manager is 15 months into the Anfield job and told his players to remember they remain on schedule in terms of their development. With 45 points, Liverpool already have 14 more than this time last season.

But as manager of a club who have waited 27 years since their last title, where supporters have rarely seen a team capable of ending that drought across three decades, there is psychological as much as technical and tactical management needed from Klopp. The mood swings on Merseyside can be as extreme as anywhere in the country, particularly when the Kop fears an opportunity has not been seized.

“I can feel around us, it’s not that positive any more. We need to bring everyone back on track,” said Klopp. “We fight in each game, that is the most important thing, and then we see what happens around that, but in cup competitions the target is win the tournament.

“If Chelsea win all their games there is no chance for any other team. For us it is still important to finish the season as good as possible and then we will see. We have quality to fight for the Champions League. If we do this and are close enough at the decisive moment you can fight for a little bit more.

“This team is still able to play wonderful football. Don’t think (about) why this htappened, and why we lost this. We are responsible for how we feel. As a team, we have to learn.”

Klopp also rejected the idea that Sadio Mane’s absence at the African Cup of Nations should be used as an excuse for Liverpool’s faltering form. “We miss Sadio and missed Phil (Coutinho) for a long time and miss Joel Matip,” said Klopp. “As a much as I like Sadio, we scored enough goals to win the games. The problem is the whole defence work of the team.”

Meanwhile, Lazar Markovic has joined Hull City on loan for the rest of the season while tomorrow’s opponents Southampton are likely to be without Virgil van Dijk for their trip to Anfield. The Saints head into the second leg with a 1-0 advantage.