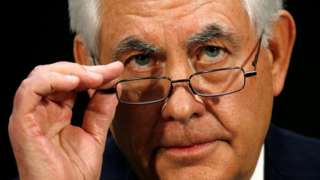 The Foreign Relations Senate Committee has narrowly approved Rex Tillerson as US secretary of state, despite concerns about his business ties to Russia.

It split along party lines, with all 11 Republicans voting in favour and all 10 Democrats against. A full vote will now be held in the Republican-run Senate.

The move caps a busy day for the new Donald Trump administration.

Most notable was the US withdrawal from the Trans-Pacific Partnership, fulfilling a campaign pledge.

President Trump signed an executive order to pull out from the 12-nation trade deal that had been a linchpin of former President Barack Obama’s Asia policy.

“Great thing for the American worker what we just did,” Mr Trump said.

At the start of his first full week in office, the president also:

Mr Pompeo’s immediate task, correspondents say, will be to establish an effective relationship between the spy agency and Mr Trump.

The president has been critical of the CIA for concluding that Russia had been actively working to influence the US presidential elections in his favour.

In another development, new US Defence Secretary James Mattis said Washington had an “unshakeable commitment” to Nato, despite Mr Trump’s earlier description of the military alliance as “obsolete”.

Mr Rubio sparred with Mr Tillerson, a 64-year-old Texan oilmen, during confirmation hearings earlier this month, accusing him of being soft on Russia.

Mr Rubio said earlier that although he had doubts over the choice, he believed a new president was entitled to deference in assembling his cabinet.

“Despite my reservations, I will support Mr Tillerson’s nomination in committee and in the full Senate,” said Mr Rubio.

He had challenged Mr Tillerson over his refusal to call President Putin a “war criminal” over Russia’s air strikes in Syria and his failure to condemn strongly enough human rights violations in Saudi Arabia and the Philippines.

Mr Rubio was among the candidates who fought Mr Trump in the battle for the Republican presidential ticket.

The partisan split in the voting is unusual. Traditionally, nominees for secretary of state have been approved by overwhelming votes from both parties.

Senator Ben Cardin, the committee’s top Democrat, said earlier that he would not vote for Mr Tillerson, also over his position on Russia, as well as other issues.

He also suggested that Mr Tillerson’s “business orientation” could “compromise his ability as secretary of state to forcefully promote the values and ideals that have defined” America.

While critics raise concern about his ability to trade in his corporate interest for a national one, some supporters suggest the former CEO’s background as a global dealmaker may bring fresh perspective to the nation’s top diplomatic post.

At a meeting on Monday night, Mr Trump told congressional leaders behind closed doors he would have won the popular vote in the election if millions of undocumented immigrants had not voted illegally.

But any notion of widespread voter fraud was widely rejected as untrue when Mr Trump made the same claim in November.