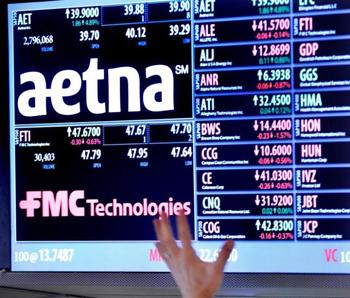 Aetna (AET.N) and Humana (HUM.N) would consider all available options for their proposed $34 billion merger, the two U.S. health insurers said on Tuesday, a day after a court ruled against the deal due to fears it would lower competition.

The deal would “substantially lessen competition” in the sale of Medicare Advantage plans in 364 counties in 21 U.S. states and on the Obamacare exchange in three Florida counties, the U.S. District Court for the District of Columbia ruled on Monday.

“We continue to believe a combined company will create access to higher-quality and more affordable care, and deliver a better overall experience for those we serve,” Aetna Chief Executive Officer Mark Bertolini and Humana Chief Executive Offer Bruce Broussard said in a joint statement on Tuesday.

Aetna spokesman T.J. Crawford said on Monday that the company was considering whether to appeal the court’s ruling.

Analysts, however, do not expect an appeal to be successful.

“We see the new Trump Administration as focused on deregulation and driving down prices through competitive intensity in Medicare Advantage,” Gupte said in a client note.

The U.S. Justice Department filed a lawsuit last July to block the two deals, arguing they would lead to higher prices. A court ruling on the Anthem-Cigna deal is pending.

Analysts believe it is unlikely that Humana would extend the deadline to close the merger beyond the agreed date of Feb. 15.

Humana is among the top players in the profitable Medicare Advantage business, which, Gupte said, could attract takeover interest in the company from insurers including Cigna and Anthem.

Aetna’s shares were down nearly 2 percent on Tuesday, while Humana dropped 1.5 percent. Anthem and Cigna were up 0.7 percent.

(Reporting by Caroline Humer in New York and Ankur Banerjee in Bengaluru; Editing by Savio D’Souza)