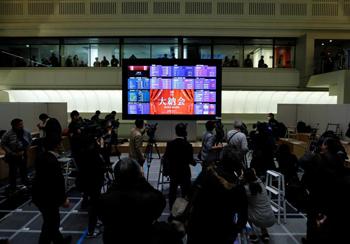 Asian stocks edged up to three-month highs on Wednesday but the dollar eased as growing uncertainty over U.S. President Donald Trump’s policies prompted some investors to take profits on the greenback’s overnight bounce.

In Asia, MSCI’s broadest index of Asia-Pacific shares outside Japan rose 0.1 percent to its highest levels since late October.

Japan’s Nikkei advanced 1.3 percent, buoyed by data showing the country’s exports rose for the first time in 15 months in December, a positive sign for the economy even as U.S. protectionism looms over the outlook.

Though the S&P 500 and Nasdaq set records on Tuesday in a broad rally led by financial and technology stocks, some investors are turning cautious on Wall Street as market valuations are starting to look stretched by some measures.

“When you compare what’s happening in this part of the world to the rest, maybe that discount isn’t so justified as it has been in the past,” said Tim Orchard, chief investment officer Asia ex-Japan at Fidelity International, referring to the traditional valuation discount that Asia trades at to the developed world.

Fidelity has about $279 billion in assets under management

The S&P 500 is trading at about 17 times forward 12-month earnings, compared with the 10-year median of 14.2 while the MSCI Asia-ex Japan index is trading bang in line with long term averages, according to Thomson Reuters Datastream.

The dollar snapped its recent losing streak and Treasury yields firmed on Tuesday as Trump shifted his focus back to growth initiatives including promising corporate tax breaks to fuel U.S. investment, after focusing on protectionism in his first few days in office. and

But the greenback drifted lower against a basket of its trade-weighted rivals on Wednesday on lingering concerns about growing protectionism.

“While some calm has come over the foreign exchange market in the past 18 hours, dealers are on a razor’s edge,” said Stephen Innes, senior trader at online FX platform OANDA in Singapore.

Sterling added to overnight gains and was trading at 1.2524 per dollar after Britain’s Supreme Court ruled that the government would need approval from Britain’s parliament before formally triggering the country’s departure from the European Union.

The decision overall was seen as clearing the way for Prime Minister Theresa May to get on with launching Brexit talks. Sterling has bounced 4 percent over the last week.

Renewed optimism over Trump’s growth policies took the wind out of a recent rally in safe-haven gold, which steadied at around $1,210 per ounce.

(Additional reporting by Venus Wu and Elzio Barreto in HONG KONG and Shinichi Saoshiro in TOKYO; Editing by Eric Meijer and Kim Coghill)