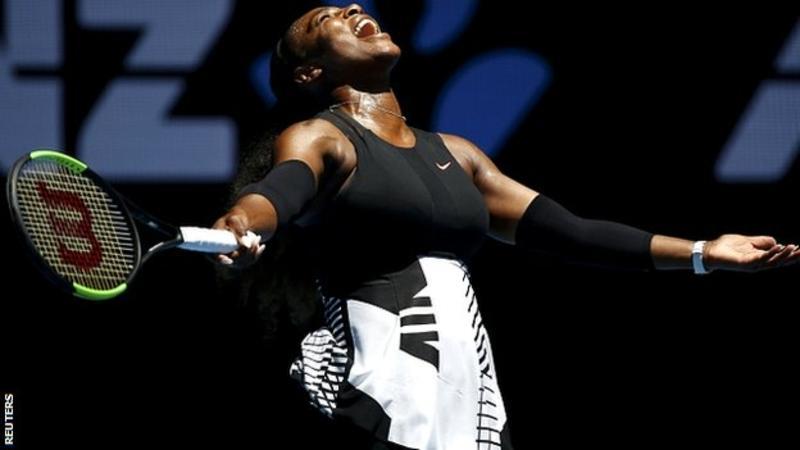 Konta, seeded ninth, went into the quarter-final on a nine-match and 18-set winning streak but came up short in her first meeting with Williams.

“Johanna Konta has been playing so well,” said the second seed.

“I was in the locker room watching her clean up her matches. She is a future champion here for sure, so I am pleased to get through this.

“I got a little frustrated with my serve, but I told myself ‘don’t get Babyrena’ [Williams’ angry alter-ego] and focused on enjoying myself out here. Today I felt I can do this, it is such a great opportunity for me.”

Konta described facing Williams as the “best experience of my life”.

In a match of big hitting and small margins, it was Williams who established an early control she would not relinquish.

The American’s usually dominant first serve faltered as she made just 45%, but she returned brilliantly to break the Konta serve – the best on tour this season going into the match – four times.

Konta had the first chance but went long with a backhand on break point at 1-1, then found her second serve under greater pressure than at any stage of the tournament so far.

Williams looked razor sharp on return, with two thumping forehand winners setting the American on the way to a 3-1 lead.

More heavy blows brought a second break, and with it the set, in game eight to end a run of 18 straight sets for Konta stretching back to her warm-up win in Sydney.

Konta showed why she had been seen as a real threat by recovering from 0-40 early in the second set and then breaking to lead 3-1, but a loose game handed the advantage back and Williams raced through five straight games to victory.

No matter how many times you have watched Serena Williams play, it is perhaps just not possible to appreciate how hard she hits the ball – and how quickly it arrives on your racquet – until you have shared a court with her.

Johanna Konta had her first experience of that today and was not able to maintain the standards she had set earlier in the fortnight when faced with such persistent pressure.

But a run to the quarter-finals means she could well retain her position in the world’s top 10.

After a few days’ rest, Konta is planning to play Fed Cup for Great Britain in Estonia and then rejoin the tour in Doha and Dubai. She has a packed schedule ahead, although may play one or two fewer tournaments if she keeps winning matches at the same rate.

World number 79 Lucic-Baroni upset Pliskova to reach the semi-finals in Melbourne – 18 years after she reached the same stage at Wimbledon.

The 34-year-old hardly played in the early years of the century because of a series of personal issues.

“I can’t believe this, this is crazy,” said Lucic-Baroni.

“The only thing I can say is God is good. I can’t believe I’m in the semi-finals again. I feel a little bit in shock right now.

“I know this means a lot to every player but to me this is overwhelming, this has truly made my life and everything bad that has happened OK.”

Lucic-Baroni was a tennis prodigy, winning junior titles at the Australian and US Opens, and winning the Australian Open doubles with Martina Hingis in 1998.

She went on to reach the semi-finals at Wimbledon the following year, losing to Steffi Graf.

Lucic-Baroni and Williams will meet for the first time since Wimbledon 1998 in Thursday’s semi-final, which begins at 03:00 GMT.

“It is really happening for the mid-30s,” said Williams.

“Mirjana – it is so good to see her back out and inspiring to see her in the semi-finals. Whatever happens there will be someone in the final in their mid-thirties.”

Serena’s sister Venus takes on fellow American Coco Vandeweghe in the other semi-final.