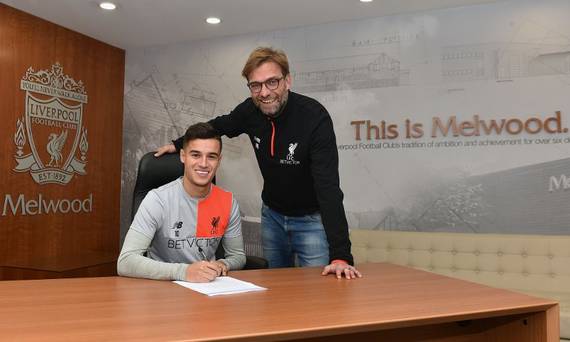 Liverpool have today announced a contract extension for Brazilian attacker Philippe Coutinho, with the Reds star reportedly signing a deal until 2022.

This latest contract would be a two year extension on Coutinho’s current deal, with the 24-year-old now established as one of the Premier League’s top attackers.

Coutinho is thought to now be Liverpool’s highest paid player, with a reported weekly wage of €175,000.

Coutinho was signed by Brendan Rodgers in January 2013 from Inter Milan for just under €10m.

“I am very happy to sign a new contract here,” he told Liverpoolfc.com

“It is a club that I am very grateful to and this shows my happiness here. I will work much harder to repay the belief shown in me.

“I signed this new contract to stay here for a few more years because it’s a great honour for me. It gives me great happiness because I was welcomed here with open arms by everyone at the club and the supporters right from my first day. I am very thankful to this football club for everything.”