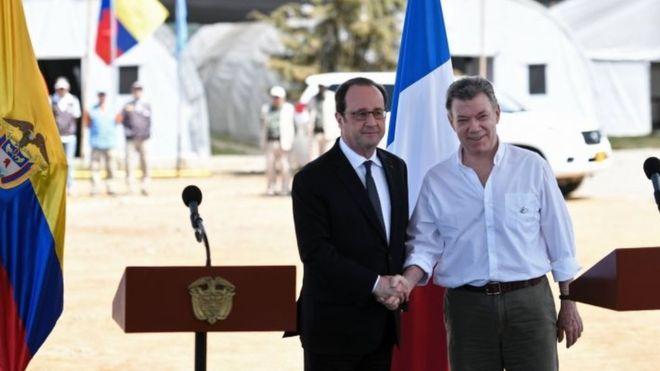 French President Francois Hollande has met leaders of Colombia’s largest rebel movement, the FARC, at a rural camp in the west of the country.

Mr Hollande – accompanied by Colombian President Juan Manuel Santos – offered help with de-mining programmes and the search for the disappeared.

France has contributed around 20% of the EU’s funding to support Colombia’s peace process.

Colombia signed a peace accord last November to end decades of conflict.

President Hollande was the first French head of state to visit Colombia in almost 30 years.

He expressed his support for the peace deal, calling it a model to resolve conflicts around the world.

“The disarming and demobilisation is not reversible,” he said at the camp in Caldono, in the department of Cauca.

There he met the head of the United Nations observation mission in Colombia, Jean Arnauld, and a FARC leader, Pablo Catatumbo, who stressed the importance of having international support.

“Having the commitment of the fifth power in the world, and its contribution to peace [in Colombia] is of great importance.

“The fact that France is accompanying and supporting the peace process is the most important backing that we have received since we signed the peace deal.”

Mr Hollande is on a Latin American tour to Chile and Colombia – one of his last foreign trips before stepping down after April-May elections which will choose his successor.

More than 350 United Nations observers from several Latin American nations are spread out at 26 different camps across Colombia preparing for the FARC’s demobilisation.

Around 5,700 members of the FARC will begin disarming over a period of six months under UN supervision, before reintegrating into society.

Former President, Alvaro Uribe, who is a critic of the peace process, accused Mr Hollande of “supporting the impunity of terrorists” by meeting with the FARC.

In an open letter earlier this week, Mr Uribe said: “Many of us feel rejection toward the successor of Napoleon and De Gaulle for his visit to the FARC.”