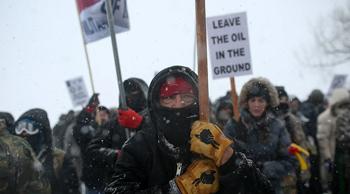 Native Americans and environmental activists voiced their alarm over President Donald Trump’s decision to advance work on the Keystone XL and Dakota Access pipelines. Both projects were reluctantly halted by the Obama administration after many protests.

Keystone XL was intended to speed up the flow of oil from Canada’s Alberta tar sands to US refineries, but in November 2015 President Barack Obama declined to approve it, calling it politically controversial.

The Dakota Access Pipeline (DAPL), intended to carry crude oil from the Bakken shale fields to Illinois, has been nearly completed aside from a segment running under Lake Oahe, which supplies drinking water to the Standing Rock Sioux Tribe in North Dakota.

Demonstrators gathered outside the White House on Tuesday afternoon. Into the evening, protesters also spoke out in Los Angeles, Seattle and New York City.

In downtown Seattle, around 1,000 protesters attended “an emergency rally” Tuesday night, according to KIRO. Many also targeted a local Wells Fargo, for the big bank’s financial role in the construction of the Dakota Access Pipeline.