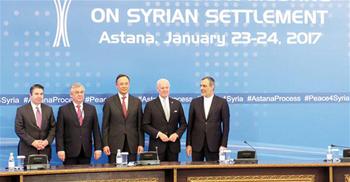 Russia, Iran and Turkey, the sponsors of peace talks between Syrian rebels and Damascus, agreed on Jan. 23 to establish a joint “mechanism” to monitor the frail truce in the war-torn country, at the end of the two-day talks in Kazakh capital Astana.

The sides will “establish a trilateral mechanism to observe and ensure full compliance with the cease-fire, prevent any provocations and determine all modalities of the cease-fire,” according to a final statement read by Kazakh Foreign Minister Kairat Abdrakhmanov following the talks in Astana.

Rebel backer Turkey and regime allies Russia and Iran also support the presence of the armed opposition at political negotiations under U.N. auspices set to take place next month in Geneva, the statement said.

Rebel spokesman Yahya al-Aridi said earlier in the day that the group would not sign a declaration coming out of the talks, saying it would be issued by its sponsors, rebel backer Turkey, regime ally Russia and possibly Iran.

Al-Aridi added that the final declaration was a “general statement” that is “not meant to be signed by the parties.”

The rebel delegation said earlier that they would agree to have Russia serve as a guarantor of the current cease-fire but not Iran, another backer of Syrian President Bashar al-Assad.

The head of the Syrian opposition delegation to talks in Astana, Mohammed Alloush, said on Jan. 23 that he had reservations about a final communiqué issued by Russia, Turkey and Iran, saying the rebels had submitted a separate cease-fire proposal.

“The Russians have moved from a stage of being a party in the fighting and are now exerting efforts to become a guarantor. They are finding a lot of obstacles from [Lebanon’s Shiite] Hezbollah forces, Iran and the regime,” Reuters quoted Alloush as telling reporters after the talks in the Kazakh capital.

The Syrian government delegation, on the other hand, viewed the Astana talks as a “success,” chief negotiator Bashar Jaafari said on Jan. 23, expressing support for the joint statement.

“Finally we have a consensual paper agreed upon by everybody,” he told reporters, referring to the joint statement.

A cease-fire brokered by Russia and Turkey has been in place since Dec. 30, 2016, but both rebels and Damascus have complained of repeated violations.

The rebels backed out on Jan. 23, the first day of the talks, of what could have been their first face-to-face talks with the Syrian regime since the conflict erupted in 2011.

They said they would not engage in direct negotiations with the regime because of its continued bombardment and attacks on a flashpoint outside Damascus.

Lavrov and Çavuşoğlu “underlined the importance of establishing direct contact between the Syrian government and representatives of the opposition,” the ministry said in a statement.

Turkish sources told state-run Anadolu Agency that the phone conversation was initiated by Lavrov’s side.

The West is playing no role in Astana, although Kazakhstan, with the backing of Moscow and Ankara, extended an invitation to the new U.S. administration last week. The local U.S. ambassador was present, while several Western envoys for Syria were also in Astana to observe developments.

Tensions have been building between Fateh al-Sham and more moderate rebel groups since the opposition was defeated in Aleppo last month. Fateh al-Sham is not covered by a shaky truce between the government forces and rebels meeting in Astana.

The Fateh al-Sham assault was focused in rebel-held areas to the west of Aleppo, and adjoining areas of Idlib province, which is almost entirely in insurgent hands.

An official in one of the rebel groups, Jabha Shamiya, told Reuters the attack began overnight, describing it as a large assault in several areas. The official said it was the first time Fateh al-Sham had attacked the FSA groups in that area.

“What they are doing serves Iran and the regime – so there is no FSA left in the north – particularly with the factions’ delegation now in Astana where the regime offered nothing with regards to the cease-fire,” said the Jabha Shamiya official.

The FSA groups now need to coordinate their efforts to repel the attack, he said.

The commander of a second FSA rebel group, Jaish al-Mujahideen, told Reuters the “extremely fierce” Fateh al-Sham attack aimed to “eliminate the revolution and turn it black,” a reference to the black flag flown by the jihadists in Syria.

He said the group had seized “some positions,” though these were far from its headquarters.