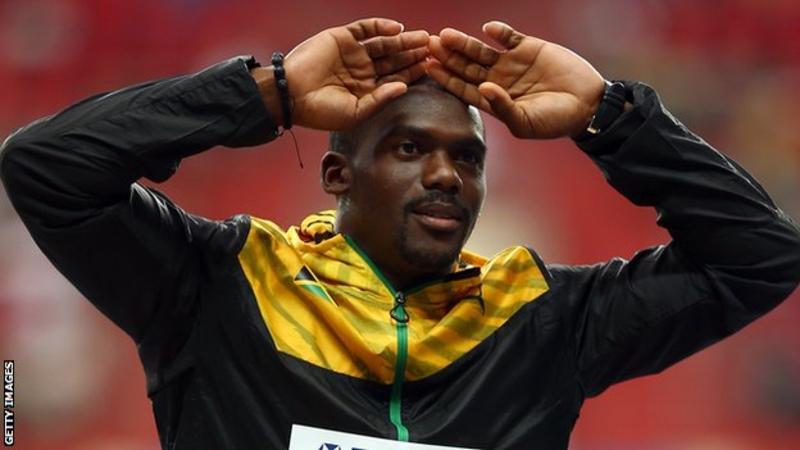 Usain Bolt will have to hand back one of his nine Olympic gold medals after Jamaican team-mate Nesta Carter tested positive for a banned substance.

Carter was part of the Jamaican quartet that won the 4x100m in Beijing in 2008.

His was one of 454 selected doping samples retested by the International Olympic Committee (IOC) last year, and has been found to contain the banned stimulant methylhexaneamine.

The team won in a then-world record of 37.10 seconds, ahead of Trinidad and Tobago and Japan, who could have their medals upgraded. Brazil would then receive bronze.

Russia’s Tatiana Lebedeva has also been stripped of her Beijing long jump and triple jump silver medals after dehydrochlormethyltestosterone was found in one of her samples.

Carter was tested on the evening of the Beijing final in 2008 but that was found at the time to contain no “adverse analytical finding”.

More than 4,500 tests were carried out at those Games, with nine athletes caught cheating.

An anomaly was discovered in Carter’s submission following the IOC’s decision to retest 454 samples from Beijing using the latest scientific analysis methods.

Carter and the Jamaican National Olympic Committee were told of the adverse finding in May – before the Rio Games – and told his B sample would be tested.

It was reported by Reuters in June that Carter’s A sample had been found to contain methylhexanamine, which has been on the World Anti-Doping Agency (Wada) prohibited list since 2004.

It was reclassified in 2011 as a “specified substance”, meaning one that is more susceptible to a “credible, non-doping explanation”.

Sold as a nasal decongestant in the United States until 1983, methylhexanamine has been used more recently as an ingredient in dietary supplements.

Speaking in June, Bolt said the prospect of having to return the gold was “heartbreaking”.

He told the Jamaica Gleaner: “For years you’ve worked hard to accumulate gold medals and you work hard to be a champion, but it’s one of those things.

“I’m more concerned about the athlete and I hope he gets through it.”

It takes the shine off Bolt’s achievement. Eight doesn’t have the same ring – ‘double treble, plus two’.

“There you go, I’m the greatest,” said Bolt after winning what was his ninth Olympic gold as Jamaica triumphed in the 4x100m relay in Rio

We know it has nothing to do with Usain Bolt – it will not damage his reputation – but it will affect it, take shine off it and he won’t be a happy man.

When I hear stories like this, a part of me does celebrate. If athletes think they have got away with it, then with retrospective testing they can never sleep peacefully.

It has to be the strongest deterrent the sport now has. Even when athletes retire they can still have their medals taken away.

Marlon Devonish, 40, was part of the British 4x100m relay team which lost the silver medal at the World Championships in 2003 following Dwain Chambers’ failed drugs test. He went on to win Olympic relay gold with Britain at Athens 2004.

Speaking to BBC Radio 5 live, he said: “With relays you work together, you build a relationship, but you never know what goes on behind closed doors and clearly Carter was taking drugs.

“Carter has tarnished the team. It’s a massively selfish act and I’m sure Bolt and the rest of the team are bitterly disappointed.

“The relationship between me and Dwain, we get on, we are cool. He apologised to me I and accepted it. Dwain has to live with it for the rest of his life, it was a sincere apology.

“I was devastated when I found out, but you have to move on.”