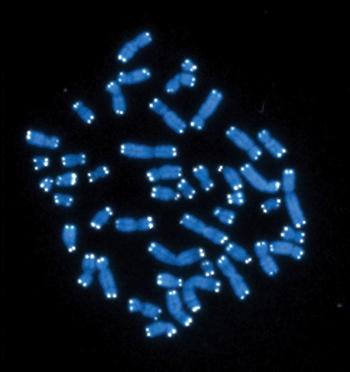 Telomeres, the stretches of DNA that protect our chromosomes, have previously been associated with aging and disease. Now, a new study investigates the link between infantile infections and telomere length in adulthood.

Telomeres are repetitive strands of DNA found at the end of human chromosomes, and they protect the ends of chromosomes from deteriorating.

With age, every time a cell divides, telomeres lose a part of their DNA and become shorter. Eventually, when telomeres become too short, cells will begin to stop replicating and die.

Decreasing telomere length has been associated with aging-related diseases such as osteoporosis, heart disease, diabetes, and some forms of cancer.

Researchers from the University of Washington, led by Dan Eisenberg, assistant professor of anthropology at the university, set out to examine the link between blood telomere length (BTL) and infectious diseases.

The study was published in the American Journal of Human Biology.

Early-life infections, which are otherwise very common, activate an immune response that involves clonal expansion (the production of daughter cells from a single cell) and oxidative stress (physiological stress on the human body caused by the accumulation of free radicals).

Given this biological mechanism, the researchers’ hypothesis was that a high infectious disease burden would shorten BTL and speed up the rate of immunosenescence – the gradual deterioration of the immune system that occurs naturally, with age.

To test their hypothesis, the scientists examined data from the Cebu Longitudinal Health and Nutrition Survey, which is a study that followed 3,000 babies born in the Philippines between 1983 and 1984.

Every 2 months up to the age of 2 years old, Cebu scientists gathered information from the mother on the health of their babies, including eating habits, breastfeeding, and diarrhea prevalence – which is a common sign of infection. Especially at the time of the Cebu Study and given public health conditions in Cebu City, diarrhea was most likely to be brought about by infection, says the lead author of the present study.

As part of the Cebu Study, the infants were also tracked as they grew up, over the following 20 years. In 2005 – when the infants had grown to be in their early 20s – scientists collected blood samples.

Eisenberg and team collected detailed early-life data on the infectious burden from 1,759 babies included in the Cebu Study. They also used their blood samples to measure BTL, and then correlated telomere length with early-life infections.

Babies with infections have shorter telomeres as adults

The results of the study confirmed the scientists’ hypothesis.

Those who had the highest number of reported diarrhea episodes as babies also had the shortest telomeres as adults.

More specifically, these babies had the highest number of cases of diarrhea between the age of 6 and 12 months – a typical weaning age, when the babies start to move around and explore more, but also an age where infections are at their peak.

Furthermore, babies whose mothers reported an average level of diarrheal infection had the equivalent of 3 additional years of telomere “aging,” compared with infants who had no infections at all.

As the authors conclude:

“This finding is consistent with our hypothesis that increased early life immune activation leads to an accelerated pace of telomere shortening in immune cells, which speculatively could manifest as increased susceptibility to infection later in life.”

One possible explanation for the findings is a form of reverse causality: it might not be the case that early-life infections affect later-life telomere length, but that these individuals had shorter telomere length in infancy to begin with, and this made them more susceptible to infectious disease.

“It could also be that they had shorter telomeres at birth. And perhaps as a result, they were more susceptible to infections at 6 to 12 months and maintained these short telomeres into adulthood,” says Eisenberg. In this case, telomeres may be an important factor that determines whether infants get an infectious disease or not.

This makes the study highly significant, as diarrheal infection is a global health concern. The Centers for Disease Control and Prevention (CDC) report that 1 in 9 children die of diarrheal disease worldwide, with diarrhea being the second leading cause of death in children under 5 years of age.

A surprising result of the study is that researchers found no association between breastfeeding and telomere length.

“We were expecting to see a relationship between breastfeeding and telomere length because babies receive maternally-produced antibodies through breast milk, which can help them fight off pathogens while their own immune systems are developing. In addition, breastfed babies are less likely to be exposed to infectious agents through contaminated food and water,” explains Eisenberg.

Eisenberg concludes, however, that more research is needed on the interplay between telomere length, infant health, and the environment.