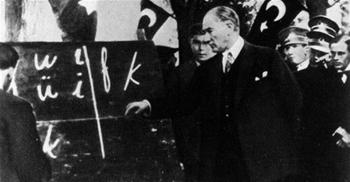 The era of Kemalist reforms after the declaration of the Turkish Republic in 1923 seems very distant today. Approaching the Republic’s 100th anniversary, the talk is of regime change as the religious nationalist government bids to transform the country’s political system into an executive presidency. But as Southern Illinois University assistant professor Hale Yılmaz’s “Becoming Turkish” shows, the early republican period can actually shed an interesting light on the present day.

The book considers individual and communal responses to the nationalist modernization project, and how that project was implemented across the country. Both supporters and detractors tend to consider this era in black and white terms, with citizens either in total compliance with the dizzying cultural revolution or in outright rejection. Through deep research of local and national sources, Yılmaz shows that the reality was far more complicated. “Experiences of the reform processes were diverse, uneven, and incomplete,” she writes. The range of reactions “included a broad spectrum of everyday forms resistance, accommodation, coping with change, or active or passive support that fell between the two extremes of violent resistance and passive submission.”

The book is based around four central chapters investigating a particular symbolic aspect of the Kemalist reforms: The famous Hat Law of 1925 and the broader issue of sartorial regulations to encourage a “Westernized and civilized” lifestyle, the application of this principle to women’s dress, the language reforms abolishing the Ottoman script and imposing the Latin script, and the celebration of new national holidays based on the War of Independence. Through a kind of bottom-up social history, Yılmaz shows how there was a wide range of responses to the state-enforced changes. Neither histories that echo the early republican state nor those that focus on resistance “capture the complexity and richness of social and cultural life in Turkey in the 1920s and 1930s,” she argues.

As much scholarship has found – against the rhetoric of ideologues on both sides – the founding of the republic did not mark an unambiguous Year Zero break with the past. Most of the Kemalist reforms rested on political, ideological, cultural and institutional legacies planted during the Ottoman era. And reactions to those reforms varied according to economic, cultural and class factors, “depending not only on one’s political and religious position, but also on one’s social, economic, educational, and family circumstances, one’s gender, and one’s established habits,” Yılmaz writes.

In addition to chronicling responses to the Kemalist reforms, the book touches on basic limits of state capacity. Ambitions were high, but in practice the early Turkish Republic simply did not have the resources or reach to successfully carry out the social transformation it wanted.  As Yılmaz writes on the language reforms, “geographical remoteness and other factors meant that significant segments of the population remained both beyond the reach of the alphabet mobilization and beyond the overall alphabet debate.” The same holds for much else. In a sense, the Kemalist revolution could never be anything other than half-achieved.

Another key point the book makes is that many of the sweeping reforms of the early republican period – successful or not – were possible only because of the environment of trauma that preceded them. Turkey was an exhausted landscape where there were still very high levels of illiteracy, recovering from a decade of wars that produced many refugees, immigrants, veterans and orphans. “The devastation caused by a decade of wars, from the Balkan wars through the War of Liberation, were crucial in creating a social and psychological environment that was conducive to the creation of a new regime and contributed to the profound social and cultural transformations that the regime led,” writes Yılmaz.

This carries lessons for today. The extraordinary turbulence that Turkey is currently going through gives the government a useful alibi to accelerate its own project of religious-nationalist social engineering. The fevered psychological atmosphere is suitable for reshaping education curriculums, renaming public spaces, and declaring new national days in line with the guiding ideology. The aim, as Erdoğan has openly declared, is the raising of conservative religious generations. Times change but the urge to engineer society, and the belief it will work, remains stubbornly persistent in Turkey.