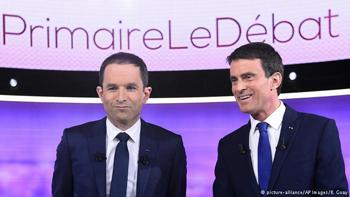 France’s former premier has positioned himself as the safe candidate ahead of the country’s presidential elections. But a left-swinging ex-education minister called on voters to turn their backs on the “old regime.”

France’s Socialist presidential candidates on Wednesday discussed their policy priorities in a final debate before a run-off vote to choose who will represent the left-of-center party in the elections.

Former Education Minister Benoit Hamon appeared to be more convincing in the televised debate, according to an Elabe poll conducted for French broadcaster BFM TV.

Some 60 percent of those polled found Hamon more convincing than his rival former Prime Minister Manuel Valls with 37 percent.

Valls, who came in second in the first round of the primaries, has attempted to position himself as the safe candidate juxtaposed to Hamon’s leftist politics.

“There is a difference between dreams and illusions, and a (political) program’s credibility. That’s what interests me, and that’s what the French are going to make their decisions over,” Valls said during the debate.

Known for his pro-business stance and labor reform legislation, Valls has attempted to shake off President Francois Hollande’s dismal approval ratings after serving in his cabinet.

Meanwhile, Hamon urged voters to “turn its back on the old regime, at these solutions that didn’t work yesterday and won’t work in the future.”

The leftist politician vowed to implement a basic monthly welfare payment of 750 euros ($805) for all French citizens, along with taxing robots, legalizing marijuana use and combating discrimination in the workplace.

Since the first round of the Socialist primaries, Hamon has gained the endorsement from third-placed Arnaud Montebourg after pulling 36 percent of the vote.

France’s left voters are slated to pick between Hamon and Valls on Sunday in the second and definitive round of voting for the Socialist presidential candidate.