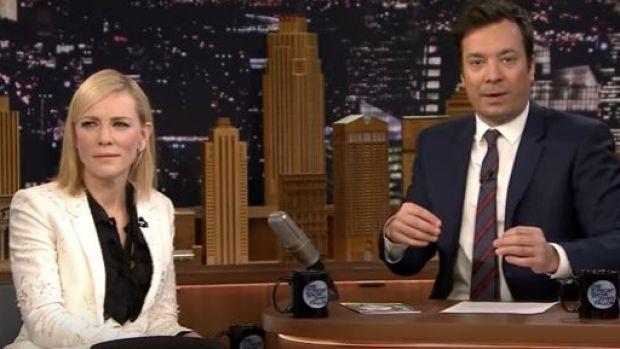 Cate Blanchett has thrown some serious shade on Donald Trump, labelling him “absurd” and “ridiculous”, and has likened his presidency to a “midlife crisis” in an appearance on The Tonight Show with Jimmy Fallon.

The actress appeared on the show for the second time on Monday night. During a segment called Emotional Interview, Blanchett turned the apolitical conversion into an opportunity to blast the newly inaugurated US President.

The game involves the guest being interviewed by Fallon, but simultaneously having to act out random themes that appear, and Trump quickly became a running joke throughout.

When the theme “bad advice” came up, Blanchett suggested that Fallon take all his money out and give it to Trump, before suggesting that he would be better off to burn it as it was the “safer thing to do”.

Later in the “uses too many metaphors” topic, Blanchett said, “It’s great to be doing something about midlife crises because it’s absurd and ridiculous,” referring to her recent Broadway play, The Present.

“I mean, almost as absurd and ridiculous as a man who has filed for corporate bankruptcy four times, who’s running the largest economy in the world,” she went on to say.

Viewers took to Twitter to voice their opinions. One user referred to Trump’s recent comments on fellow actress Meryl Streep.

Another user voiced support for Blanchett.

However, others were critical of the Oscar winning actress.

Fallon remained impartial throughout the exchange and, while laughing, did not contribute to the criticism.