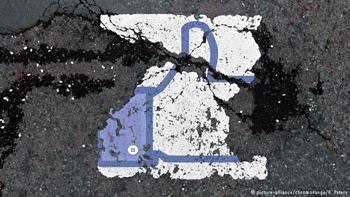 The nature of social media means it is a place where fake news can spread easily and unchallenged. The problem must be solved without recourse to censorship, Council of Europe Secretary General Thorbjorn Jagland told DW.

DW: What happens if we don’t counteract fake news?

It’s a great danger for democracy because political discussion becomes based on false facts and special groups or extreme groups can use this to enhance their political message.

I think our democracies are strong enough to deal with it, but we have been in a transitional period where we have not been so much aware of this danger. The more aware of it we become, the less important it becomes in public discourse.

How might that work? How do we know what is fake news and what is the best way to counter it?

It’s important now to make a distinction between fake news, which is uncomfortable for many and which contains false facts, and what becomes hate speech.

Fake news that becomes hate speech is fairly illegal all over Europe. When you have hate speech that is incitement to violence, open racism, Holocaust denial – this is illegal content which internet providers have an obligation to take down.

But then you have fake news which is not illegal. It’s a different thing. Here we enter a very difficult sphere, because it can pave the way for censorship by authorities if we give them the task to look after this. I think it’s better to ask the private companies to look into this.

We have to differentiate between what is clearly illegal and what is more uncomfortable when these things are posted on the internet.

So how would you deal with the two separate things?

If it’s not illegal and it doesn’t have to be taken down, it has to be combated in a different way. For instance, in open discussions, or where the internet companies are making people aware that what has been posted can contain disputable facts.

It cannot be done by state authorities. It can be done by the public. We are mobilizing young people very much against hate speech and we can do the same with regard to fake news – mobilize them and, in particular, teach young people.

I’ve seen a very vibrant debate in Germany about this and that Facebook has come up with a response where they are now establishing a unit of experts who can go through what is posted and make the public aware if false facts or dubious facts are published. And that’s a good thing.

So companies should address fake news without taking things down?

It would be a very difficult thing to say clearly that something is so wrong or so false that we have to take it down. I would be very worried if one started to introduce laws and law enforcement which might be misused by authorizes.

What is needed: Law enforcement and governments must be very assertive when it comes to clearly illegal content which has been declared illegal. That kind of thing has to be dealt with by authorities, but what is on the other side of the borderline is a different thing.

I also have to say that false facts may become hate speech. For instance, when clearly wrong facts about whole groups are spread – the way they were about Jews before the war – then it may lead to hate speech and incitement to violence, and this is also something that one has to deal with from the law enforcement side.

You mention public discourse and reducing the importance of fake news. How might this be done?

It’s about internet literacy, to introduce that in education, so that young people understand they have to look carefully into what they read on the internet and to be able to differentiate between facts and what is more dubious or maybe not a fact at all.

I think it’s a matter of education. We’ve seen it before- always when we get new ways of communication we need to raise awareness of how this can be used and misused. And we have to do the same now with regard to the internet as we did with older kinds of communication in the past. So I think right now people are becoming more aware that there may be a lot of false news on the internet and that’s very good. If private companies can help us with that, then that would be a very good solution.

Should it be the case that an onus is put on companies to employ fact checkers and flag up things that may be problematic?

It has to be understood that social media is not really media in the old understanding of media, of a newspaper for instance, or broadcasting news, that there is a chief editor that has the responsibility. With social media there is no editor. It’s more like a telephone line that we had in the past, and you could say everything you wanted on the telephone, but there was no editor, and you could spread rumors and so on, over the telephone line.

They have to introduce more responsibility for what is posted on social media. How this is to be done is to be discussed with them. We cannot impose solutions on them because that could lead in the wrong direction of censorship. It’s a very intricate, difficult question.

Thorbjorn Jagland is a Norwegian politician from the Labour Party, and a former prime minister of the country. He is currently serving his second term as the Secretary General of the Council of Europe and is the former chairman of the Norwegian Nobel Committee, which is responsible for awarding the Nobel Peace Prize.