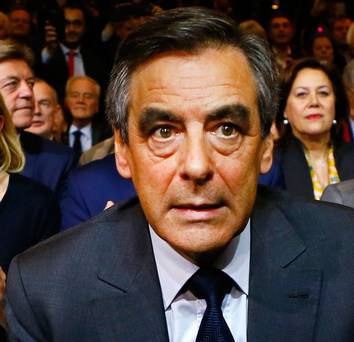 French prosecutors have opened an investigation into François Fillon, the conservative politician tipped to become France’s next president.

Mr Fillon has found himself at the centre of a political scandal after he was accused of paying his wife half a million euro for a fictitious job as a parliamentary assistant.

He has condemned the claims as “misogynistic”.

The investigative weekly ‘Le Canard Enchaîné’ reported that Penelope Fillon received around €500,000 of taxpayers’ money for employment as parliamentary assistant to her husband and later to his replacement at the National Assembly.

It is not illegal for French parliamentarians to employ a family member in their office but the paper said it had tried and failed to find any evidence that Mrs Fillon had ever actually done any work at the parliament.

It also said she was paid around €5,000 a month between May 2012 and December 2013 by a literary publication owned by a close friend of Mr Fillon, but had only contributed two book reviews in that time.

The allegations of financial impropriety are the first major hurdle the 62-year-old has faced since he won the right-wing primaries late last year to become Les Républicains party candidate for presidential elections this spring.

“I am outraged by the contempt and the misogyny of this article,” Mr Fillon, a former prime minister under president Nicolas Sarkozy, told journalists during a trip to the city of Bordeaux.

“Just because she is my wife she should not be entitled to work? Could you imagine a politician saying, as this story did, that the only thing a woman can do is making jam? All the feminists would scream,” he said.

His spokesman Philippe Vigier denied any wrongdoing, insisting that Mrs Fillon’s work was not fictional.

Mr Fillon first met Penelope, who is from Wales, while she was in France on a year out from her university studies in 1976. They live in a chateau near Le Mans and have five children.

Mr Fillon is tipped by nearly all opinion polls to be the winner of the two-round presidential elections in April and May.

But after the unexpected results of the Brexit referendum in Britain and the presidential victory of Donald Trump in the US, commentators say that Front National leader Marine Le Pen or possibly the independent centrist Emmanuel Macron cannot be discounted.

Socialist former prime minister Manuel Valls, who hopes to win his party’s ticket as presidential candidate in a run-off primary vote on Sunday, urged Mr Fillon to explain himself on the matter.

“You can’t be the candidate of honesty and transparency and not respond,” he told France Inter radio. (© Daily Telegraph, London)