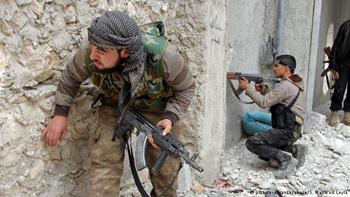 The former al-Nusra Front has launched attacks on Free Syrian Army factions to “thwart conspiracies.” The militant group’s allies have called on it to stop attacking opposition groups or face the consequences.

The Levant Conquest Front, formerly known as al-Nusra Front, launched a series of attacks in northwestern Syria, one of the last bastions of resistance to Syrian President Bashar al-Assad.

The militant group, also known as Jabhat Fateh al-Sham, said in a statement on Tuesday that it had been forced to act in order to “thwart conspiracies” aimed at discrediting them.

“Conferences and negotiations” were “trying to divert the course of the revolution towards reconciliation with the criminal regime (of Assad),” the group said, referring to peace talks in the Kazakh capital of Astana.

The Levant Conquest Front had not been invited to the talks, brokered by Assad’s ally Russia and Turkey, which has supported the FSA.

‘We will not allow this to pass’

Considered one of the most powerful rebel groups in Syria, the hardline Nusra Front last year announced that it had cut ties with al-Qaeda, despite a lack of change in its leadership and overall structure. It rebranded under the name Levant Conquest Front.

Before this week’s attacks on FSA factions, the group had been prepared to merge with Ahrar al-Sham, another major Islamist faction fighting in the Idlib province.

However, Ahrar al-Sham warned the Levant Conquest Front of attacking opposition groups in the area, accusing it of rejecting mediation efforts aimed at reconciling FSA factions and the former al-Qaeda affiliate.

“If the fighting continues and if one party continues to do an injustice to another, then we will not allow this to pass, regardless of the cost, even if we become victims of this,” said Ahrar al-Sham chief Abu Ammar al-Omar.

Since 2011, the Syrian opposition has splintered among ideological lines, with one side considered to hold nationalist ideals and the other seeking hardline Islamic rule.

More than 300,000 people have been killed and half the population displaced since the conflict erupted six-years-ago, when regime forces launched a brutal crackdown on peaceful protesters demanding Assad step down.