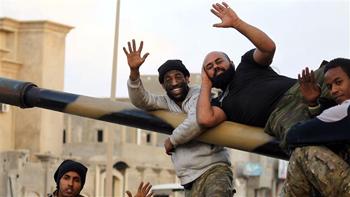 Forces belonging to the so-called Libyan National Army (LNA) say they have taken complete control of a long-contested district in the flashpoint city of Benghazi.

The LNA’s spokesman, Colonel Ahmed al-Mesmari, made the announcement on Wednesday, saying the LNA forces, led by Marshal Khalifa Haftar, “liberated all of Ganfouda,” an area 15 kilometers west of the center of Benghazi.

Two other LNA officials also confirmed that Ganfouda had been retaken from extremist militants, adding that some of the militants, however, had fled to a nearby area known as the “12 blocks.”

A medical source said some 30 forces of the LNA had been killed and 25 others wounded during the past two days of fighting with Daesh terrorists in the western district of Ganfouda.

Meanwhile, a car bomb explosion rocked the center of Benghazi later in the day, leaving at least six people wounded, including five civilians and a soldier. The attack in Benghazi’s Shara-e-Jamal street was likely aimed at a military convoy traveling along the road, according to witnesses.

Benghazi has witnessed fierce battles in the past two years between pro-government troops led by Haftar and armed militias, including Takfiri groups such as Daesh and the al-Qaeda-linked Ansar al-Sharia.

Haftar and a faction of loyalist army personnel have taken it upon themselves to fight extremist militants in Libya’s second city.

The general used to be an ally of Libya’s long-time dictator Muammar Gaddafi. He, however, joined the Libyan revolution against Gaddafi in 2011.

Libya has been dominated by violence since a NATO military intervention followed the 2011 uprising, which led to the overthrow and death of Gaddafi. Rival governments were set up in Tripoli and eastern Libya back in 2014.

In December 2015, however, the two administrations agreed on forming the Government of National Accord (GNA) after months of UN-brokered talks. The presidential council of the GNA arrived in Tripoli in March last year in a bid to restore order to the oil-rich North African country.

Haftar has refused to profess allegiance to the internationally-recognized GNA, but his forces have been fighting militants in Benghazi since 2014. The opponents of Haftar say he is essentially involved in a struggle for power and is undermining the country.