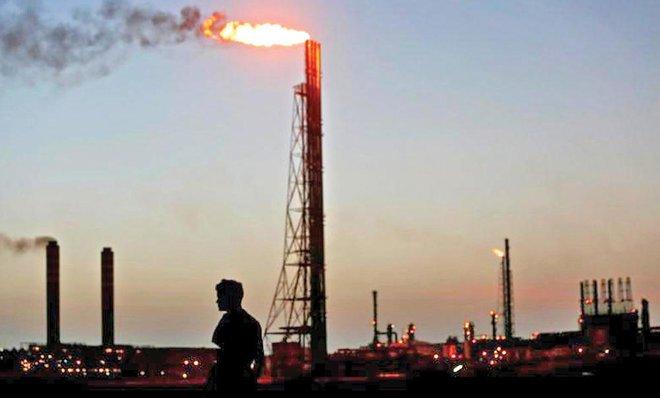 Since prices began to sink in 2014, the five “supermajors” more than doubled their combined net debt to $220 billion. That may be as bad as it gets. At $50 a barrel, they can balance their books and pay dividends without borrowing for the first time in five years, according to analysts at Jefferies International Ltd. All of the drillers will probably report profit growth in the next two weeks.

As the price of oil declined, producers saved billions of dollars by shedding jobs, renegotiating supplier contracts and canceling projects. BP Plc has said it plans to keep at least 75 percent of its cuts, and other companies have expressed similar sentiments. That strategy, combined with oil’s recovery, are allowing the majors to generate cash again, a key focus for investors heading into earnings season.

“As a group they are at peak debt levels now,” said Jason Gammel, a London-based analyst at Jefferies, citing operating and capital efficiency as well as rising oil prices. “Because quarterly earnings are backward-looking, the outlook is usually a bigger driver of the stock,” he said, with cash flow and dividends more important.

In 2014, when oil sold for $100 a barrel, the five supermajors generated a combined $180 billion in cash from operations. Last year, that figure fell to just $83 billion, Jefferies estimates. Cost cuts and higher oil prices will drive that up to $142 billion in 2017 and $176 billion the following year, according to the brokerage.

As the companies report for the fourth quarter, three of them — Exxon Mobil Corp., Chevron Corp. and BP — are likely to post the first year-on-year increase in profit since 2014, according to analyst estimates compiled by Bloomberg. Based on those expectations, here’s what we should see:

During the market rout, oil producers borrowed to maintain dividends they deemed sacrosanct. In the case of Shell, debt was also pushed higher by its $54 billion purchase of BG Group Plc. The Anglo-Dutch company, as well as Exxon, BP and Total, suffered credit-rating downgrades as debts spiraled higher.

Fitch Ratings Ltd. estimates Total will have a $1 billion cash surplus after paying dividends if oil stays at $55 a barrel this year compared with a deficit of $3.6 billion at $45 barrel. Shell’s shortfall would be $823 million at $55, compared with $7.5 billion at $45.

“A lot of fat has been cut,” said Maxim Edelson, a Moscow-based senior director at Fitch. “The companies will have to think about if they want to keep cutting spending or start investing for growth again.”

Repairing and strengthening the balance sheet will remain the principal use of surplus cash, Jefferies’ Gammel said. Shell, the world’s most indebted oil producer after Brazil’s Petroleo Brasileiro SA, said last year that tackling that burden was its top financial priority. Shell and some of its peers remain on credit-rating watch for further downgrades.

Benchmark Brent crude is still trading at half its level of mid-2014 but is expected to average $56 a barrel this year, up from $45 in 2016, according to analyst forecasts compiled by Bloomberg. It rose 0.9 percent to $55.57 at 1 p.m. Singapore time.

“We’ve had 2 1/2 years of doom and gloom and we are on the cusp of the upstream oil and gas sector entering a new recovery,” said Tom Ellacott, a senior vice president at consultants Wood Mackenzie Ltd. “We expect the mood music to be a bit more upbeat.”