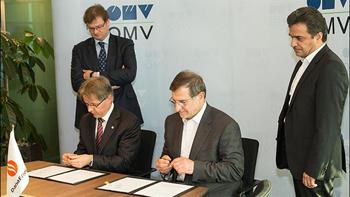 Austria’s energy giant OMV says it has signed a basic agreement with Iran’s Dana Energy to cooperate in the Iranian oil and gas development projects.

OMV announced in a statement on its website that the agreement – a Memorandum of Understanding (MoU) – allowed both parties to cooperate “in the evaluation of possible upcoming development and re-development projects in the Iranian oil and gas industry”.

The MoU was signed in Vienna by Mostafa Khoee, Dana Energy board member and upstream president, and Johann Pleininger, OMV executive board member responsible for Upstream.

Meanwhile, Platts energy news service in a report emphasized that the MoU had opened the way for UAE’s Mubadala Investment industrial group to participate in Iran’s upstream petroleum sector.

Mubadala Investment owns UAE’s International Petroleum Investment Company which has a share of 24.9 percent in OMV and is the second biggest shareholder of the company after the Austrian government with 31.5 percent.

OMV has a long lasting partnership with Iran and entered the country in 2001as the operator of the Mehr exploration block in western Iran. The project led to the successful discovery of Band-E-Karkheh field in 2005.

Also, OMV CEO Rainer Seele said last February that the company had set Iran as one of the three development areas in the upstream portfolio.

On a related front, the National Iranian Oil Company (NIOC) and OMV signed an MoU last year concerning the evaluation of various fields in the Zagros area in the west of Iran, for potential future development.