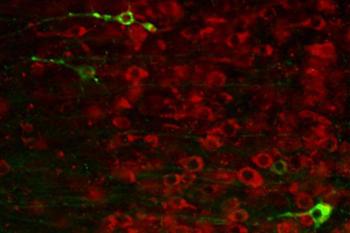 Alzheimer’s disease is a neurodegenerative illness that affects millions of people in the United States. The condition is known to be gradual and irreversible – but emerging research may have found a way to reduce, and even reverse, some of the neurological damage that comes with the disorder.

Alzheimer’s disease affects more than 5 million U.S. adults, according to the National Institute on Aging.

The brain disorder has been linked to an accumulation of plaque and dysfunctional proteins in the brain. Most of the existing research has focused on the buildup of the protein amyloid beta, but more recent studies have used the latest imaging techniques to investigate another protein, called tau.

In a healthy brain, the protein tau contributes to the good functioning of the neurons. The brain has a kind of cell transportation system that carries cell parts, food molecules, and other materials along something that resembles railroad tracks.

Usually, tau helps the tracks to stay straight. In the case of Alzheimer’s patients, however, the tau protein collapses into so-called tangles, which are toxic strands that damage the brain. The tracks can no longer stay straight, and this leads to not only dementia, but numerous other neurodegenerative diseases – including progressive supranuclear palsy and corticobasal ganglionic degeneration.

Now, researchers from the Washington University School of Medicine in Missouri have studied the behaviour of the tau protein in both mice and monkeys, as well as the possible ways of reducing it.

The team was led by Dr. Timothy Miller, a David Clayson Professor of Neurology at the university, and the findings were published in the journal Science Translational Medicine.

Studying the tau protein and treatment possibilities in mice

Miller and team examined genetically modified mice that secrete a mutated version of tau, which clumps more easily and is therefore more prone to forming tangles.

These mice developed tangles by the age of 6 months and showed signs of neurological damage by the time they were 9 months old.

RNA facilitates the flow of genetic information between DNA and proteins. However, the synthetically created antisense oligonucleotides break the “DNA makes RNA makes protein” chain, by destroying the RNA “middle-man” before it can build the protein.

Miller and team gave the 9-month-old mice the anti-tau oligonucleotide every day for a month. They then measured the amount of total tau RNA, total tau protein, as well as tau protein tangles in the mice’s brains when they reached 12 months of age.

All three parameters decreased significantly in the mice treated with the oligonucleotide, compared with a placebo control group of mice.

“We have shown that this molecule lowers levels of the tau protein, preventing and, in some cases, reversing the neurological damage. This compound is the first that has been shown to reverse tau-related damage to the brain that also has the potential to be used as a therapeutic in people.”

Additionally, treated mice lived over a month longer than untreated ones and were better at building nests. This indicates that they functioned better socially, cognitively, and had superior motor skills – functions that are frequently impaired in people with Alzheimer’s disease.

Finally, treated mice did not show signs of hippocampal shrinkage and neuronal death at the age of 9 months – the time at which genetically modified mice typically display these abnormalities.

Testing the drug in monkeys

Dr. Miller and team are also currently involved in clinical trials that are testing how oligonucleotides work in more human-like animals.

The team studied the effects of the synthetic molecules on crab-eating macaques. They administered two doses of nucleotides or two doses of a placebo, 1 week apart, directly into the cerebrospinal fluid – as one would when treating humans.

The trial revealed that, in monkeys too, the oligonucleotide reduces both tau RNA and tau protein in the brain. Tau protein levels were also reflected in the cerebrospinal fluid.

Dr. Miller also comments on the implications his study has on neurodegenerative and neuromuscular treatment options. He says:

“Tau tangles correlate with cognitive decline in several diseases. This is a promising new approach to lowering tau, but we have to test whether it is safe in people, and whether it actually lowers tau, as it is designed to do, before we get to the question of whether it has any effect on the disease. But everything we have seen so far says that this is worth investigating as a potential treatment for people.”