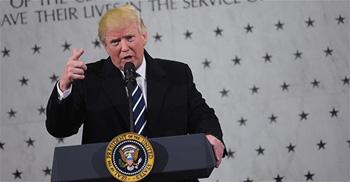 President Donald Trump is expected to sign an executive order this week that could restrict people from seven, predominantly Muslim countries from entering the US. It comes after the Republican pledged during his election campaign to temporarily ban Muslims from entering the nation. He later said migrants from certain countries that pose a threat would have to undergo “extreme vetting”. The order to temporarily suspend visas for citizens from Syria, Iraq, Iran, Yemen, Libya, Somalia and Sudan is expected to be signed at some point this week, according to aides who have been briefed.

The majority of the seven countries have a high level of displaced people as a result of conflict.

It is thought that President Trump will also propose to temporarily ban refugees from entering the US. Religious minorities escaping persecution will not face the restriction, it has been reported.

After the visa suspension is in place, work on the vetting process will begin.

But White House spokesman Sean Spicer said that the nominee for Secretary of State, Rex Tillerson, would need to be installed first.

President Trump will begin cracking down on border security during a trip to the Department of Homeland Security on Wednesday. He called it a “big day” for national security. He is expected to sign an executive order to kick-start the construction of the border wall with Mexico. President Trump initially said Mexico would pay for the wall, before backtracking and saying the country would reimburse the US. He is also likely to order America’s so-called sanctuary cities to cooperate with authorities to deport illegal immigrants if they want to protect their funding.