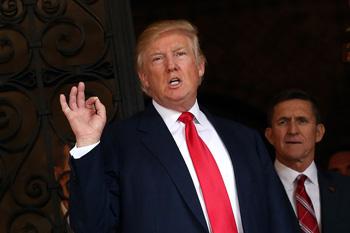 Donald Trump is considering reinstating waterboarding and other methods widely considered torture for use in interrogations, prompting a backlash from US officials.

Mr Trump vowed during his election campaign to bring back waterboarding, “and a hell of a lot worse”, but later said he had taken to heart statements by James Mattis, his new Pentagon chief and a retired Marine Corps general, that torture did not work and was not in America’s interest.

He changed his tune yesterday, telling ABC news the US had to “fight fire with fire” as terrorist groups beheaded their prisoners in the Middle East.

“We have that and we’re not allowed to do anything. We’re not playing on an even field,” he said.

Mr Trump insisted that torture was effective for extracting information but said he would confer with Mr Mattis and Mike Pompeo, the CIA director, about what methods could legally be used.

“If they don’t want to do it that’s fine,” he said of waterboarding, adding “if they want to do it” he would work toward implementing it.

Meanwhile, US media reported that Mr Trump was considering reopening CIA ‘black sites’ outside the US for detention of terrorism suspects, though it later emerged that the reports were based on a policy proposal that had not been signed off by Mr Trump.

Senator John McCain, a former prisoner of war and outspoken opponent of torture, said: “The president can sign whatever executive orders he likes.

“But the law is the law. We are not bringing back torture.”

Waterboarding, or simulated drowning, was banned by Barack Obama after he took office in 2009.

Meanwhile, Mr Trump announced a “major investigation” into alleged voter fraud during the 2016 election yesterday, despite a dearth of evidence that such fraud took place.

“Depending on results, we will strengthen up voting procedures!” he wrote on Twitter.

The new Republican president has bristled at references to losing the popular vote to Democrat Hillary Clinton and says he would have won it if not for fraud.

He repeated these claims earlier this week, telling congressional leaders that three to five million illegal immigrants had voted in the election.

Claims of widespread voter fraud have been debunked and election officials from both parties in all 50 states have denied such fraud took place.

Nancy Pelosi, the top House Democrat, said the claims exposed Mr Trump’s insecurities and that she felt “very sad” and “sorry” for him.

While few prominent Republicans have backed Mr Trump’s claim that millions of fraudulent votes were cast in 2016, some welcomed the investigation.

Democrats have countered that some 10pc of the US voting population, made up predominantly of low-income and Democratic-leaning voters, lack government ID and would lose access to the polls.

In his final press conference as president, Mr Obama strongly rejected claims such as those being made by Mr Trump about electoral fraud, saying: “This whole notion of voting fraud; this is something that has constantly been disproved. This is fake news,” he said.

He referred to the US as “the only country among advanced democracies that makes it harder to vote” and cited restrictions on access to the ballot as one of the things he would speak out against in his post-presidency.

While Mr Trump equated registering in two states with fraud in his tweet, election officials say it is a common occurrence that does not necessarily indicate voter fraud.

The ‘Washington Post’ and NBC News confirmed a report that Mr Trump’s younger daughter Tiffany is registered in both Pennsylvania and New York. (© Daily Telegraph London)