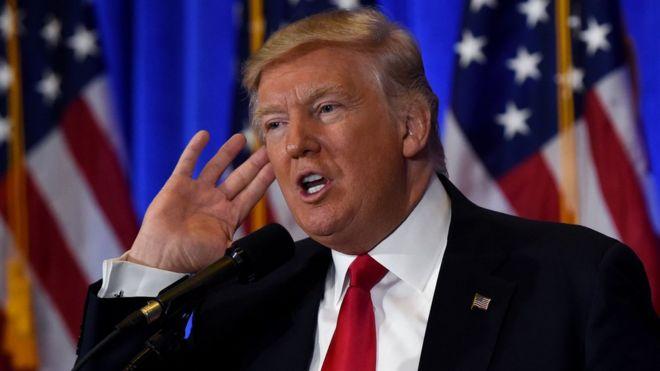 by Justin Sink and Bill Faries

President Donald Trump will impose a temporary ban on virtually all refugee admissions to the U.S. as early as Thursday, following his pledge a day earlier to build a wall along the Mexican border.

He’ll also shut down almost all arrivals of non-U.S. citizens from war-torn countries such as Syria in his push to deliver on campaign promises to strengthen U.S. borders.

Trump is preparing to act on another familiar pledge — imposing what he’s called “extreme vetting” of visa applications from refugees from countries plagued by terrorism.

While details of the plan may change, the administration has been considering a 120-day suspension of refugee admissions, followed by a reduction in the number allowed into the U.S. in the current fiscal year from 110,000 to 50,000, according to a person familiar with the plan who asked not to be identified in advance of Trump’s announcement.

The plan also would suspend all entry to the U.S. — including immigration and visits — from Mideast and North African countries tied to terrorism, according to a draft proposal obtained by Bloomberg News. The document refers to a category in spending legislation that includes Syria, Iraq, Iran, Sudan, Libya, Somalia, and Yemen. The government would subsequently develop a permanent list of countries from which visas would no longer be issued.

“It’s going to be very hard to come in,” Trump said in the interview. “Right now it’s very easy to come in. It’s gonna be very, very hard. I don’t want terror in this country.”

He added that “I’ll absolutely do safe zones in Syria for the people. I think that Europe has made a tremendous mistake by allowing these millions of people to go into Germany and various other countries.”

While former President Barack Obama rejected proposals for safe zones in Syria as requiring too great a commitment of American forces and risking air confrontations with Russia, Trump has raised the possibility of working with Russia and Turkey in the fight against Islamic State terrorists in Syria.

Trump’s call to limit refugee admissions has been roundly denounced by human-rights groups, who say vulnerable people seeking to flee religious or political persecution would be denied safe haven. Although Trump has pulled back from statements early in his presidential campaign that he would ban immigration by Muslims, the critics say his planned actions are intended to embrace anti-Muslim sentiment and would erode America’s standing around the world.

“We bomb your country, creating a humanitarian nightmare, then lock you inside,” Senator Chris Murphy, a Connecticut Democrat, said in a statement Wednesday. “That’s a horror movie, not a foreign policy.”

The U.S. already has accepted 25,671 refugees this fiscal year, according to data published by the State Department dating to the end of last month. They included 10,477 refugees from the Middle East, including 3,566 from Syria.

Based on the draft document, Trump would also require that all individuals seeking a non-immigrant visa would be required to sit for in-person interviews, including repeat visitors.

Obama administration officials defended refugee admissions that they said focused on individuals with existing links to America, as well as women and children facing persecution or in desperate need of medical care. The screening process has averaged 12 to 18 months and includes reviews by multiple law enforcement and intelligence agencies. Incidents of violence among refugee populations are far lower than for any other immigrant group.