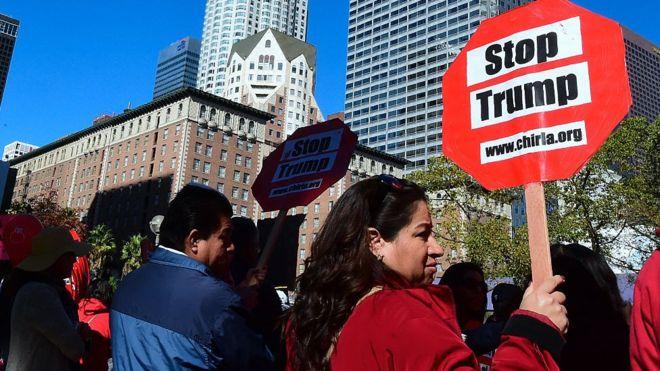 Mr Trump’s border wall announcement will make most of the headlines today, given that it was a central focus of his presidential campaign and has increased diplomatic tension with the Mexican government. His plan to target US “sanctuary cities”, however, likely sets the stage for a much tougher, uglier domestic political fight.

More than 400 jurisdictions across the country, including New York, Los Angeles, Boston and Seattle – major cities in left-leaning states that did not vote for Mr Trump – have enacted policies protecting undocumented immigrants within their boundaries. Officials in these designated areas, including local law enforcement, are not allowed to enquire as to an individual’s immigration status in the course of their duties.

Candidate Trump pledged to end this practice, and on Wednesday he put some teeth into his promise – authorising the federal government to withhold funds from cities that do not co-operate with immigration officials or comply with federal law.

His executive order frames the issue as one of national security.

The US government has often used the power of the purse to compel states and localities to bend to its will on matters like highway speed limits, educational policies and setting a minimum drinking age.

So far, however, some of the biggest cities are preparing to go toe-to-toe with the federal government over the issue. They assert that they need to be able to provide services to all their residents to avoid public health crises and encourage co-operation between undocumented immigrants and police.

“Building and maintaining trust between local law enforcement and the communities they bravely serve is vital to ensuring public safety,” New York Attorney General Eric T Schneiderman said in a press statement. “Any attempt to bully local governments into abandoning policies that have proven to keep our cities safe is not only unconstitutional, but threatens the safety of our citizens.”

According to estimates, New York City alone could risk losing more than $7bn in federal funds – although Mr Trump’s executive order clarifies that funding for law enforcement won’t be affected.

Larger cities may be willing to stand and fight the Trump administration, but they’re not the only jurisdictions that could be in the crosshairs. Smaller towns, like Maywood, California, also have set themselves up as sanctuary cities, and they may be less able to survive the threatened federal cutbacks – unless they get help from their state governments.

“California is going to fight Trump all the way, and that’s great to have the support from state leadership,” Eduardo De La Riva, mayor pro tem of Maywood, told the Los Angeles Times. “I think we’re sending a clear message when you have several of the largest cities also saying we’re going to take a stance.”

In 2004 then-Senator Barack Obama condemned those who tried to divide the US into red states and blue states – Republican and Democratic.

Mr Trump, in his inaugural address, took a more confrontational tone, and he appears ready to follow through with a policy that sets his conservative administration in a direct and highly visible confrontation with liberal cities.