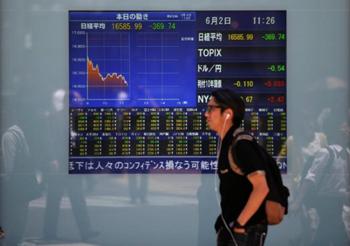 Asian shares were steady on Friday in holiday-thinned trade and were on track for a solid advance this week, while oil and the dollar retained gains in the wake of strong U.S. corporate earnings.

MSCI’s broadest index of Asia-Pacific shares outside Japan .MIAPJ0000PUS was little changed with several markets closed for the Lunar New Year holiday. It is on track to end the week up 1.9 percent.

Chinese, Taiwan, Vietnam and South Korea are shut for the Lunar New Year holiday. China will resume trade on Friday, Feb. 3; Taiwan and Vietnam on Thursday, Feb. 2, and Korea on Tuesday, Jan. 31.

The S&P 500 .SPX and the Nasdaq .IXIC inched back down to end the day a touch below Wednesday’s record close.

“U.S. stock markets tend to be a sentiment leader for world markets and in what’s become a familiar pattern over recent years, the quarterly profit reporting season is supporting that sentiment,” Ric Spooner, chief market analyst at CMC Markets in Sydney, wrote in a note.

“Around a third of companies in the S&P 500 index have now reported and overall earnings are ahead of consensus forecasts,” he said.

The MSCI World index was steady on Friday. It hit a record intraday high on Thursday before closing about 0.1 percent lower.

The Mexican peso MXN= tumbled about 0.6 percent against the dollar on Friday after the White House said the U.S. could impose a 20 percent tax on Mexican imports to pay for a border wall between the two countries.

That followed Mexican President Enrique Pena Nieto’s decision to pull out of a meeting in Washington after his U.S. counterpart Donald Trump tweeted that it would be better for the Mexican leader not to visit if his country wouldn’t pay for a wall along the border.

Trump’s office later walked back the idea of a tax, saying that was “one way” of making Mexico pay.

The dollar index .DXY, which tracks the greenback against its trade-weighted rivals, was up 0.2 percent at 100.58 on Friday. On Thursday, it touched a seven-week low but closed up 0.35 percent.

It is still set to end the week about 0.2 percent lower, pressured by market jitters earlier this week on Trump’s protectionist inauguration speech.

But since then, “Trump has signed several executive orders… showing continuity from his campaign days, so the markets expect him to go ahead with the fiscal stimulus as well,” said Minori Uchida, chief FX analyst at Bank of Tokyo Mitsubishi UFJ.

In commodities, oil extended gains after posting solid increases on Thursday that were driven by the resurgence of risk appetite. But a jump in U.S. inventories this week capped the gains.

Gold slid on Friday in its fourth straight session of losses, as investors dumped the precious metal for riskier, higher returning assets.

Spot gold fell 0.3 percent to $1,184.90 an ounce, heading for a 2.1 percent loss for the week, its first weekly decline in five, and its worst weekly performance this year.