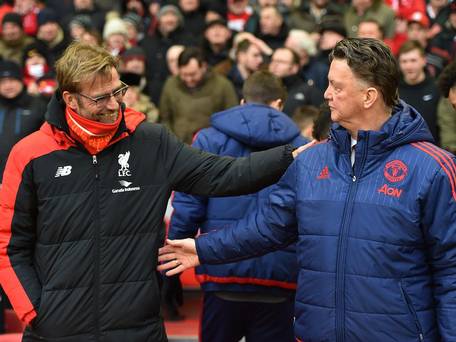 Van Gaal’s tenure at Old Trafford was largely seen as a failure. So do we need to change the way we talk about Klopp?

After 82 games in charge of Liverpool, Jurgen Klopp’s record is no better than Louis van Gaal’s was at the same stage of his tenure at Manchester United.

The German watched his side go down 1-0 to Southampton on Wednesday night, a second defeat in five days and one that sees them exit the EFL Cup at the semi-final stage.

That loss also extended a serious downturn in form for Liverpool: the only victory in their last seven games came in the FA Cup replay against Plymouth Argyle who play in English football’s fourth tier.

During Van Gaal’s first 82 games at Old Trafford, a tenure which was eventually seen as a failure, the Dutchman oversaw 41 wins, 21 draws and 20 losses – also giving him a win ratio of 50 per cent.

Van Gaal’s United ended up winning the FA Cup last season but that was not enough for the manager to avoid the sack with the club failing to qualify for the Champions League.

​While Klopp has transformed Liverpool’s style of play since taking over in October 2015, and has seen his team tipped as title contenders at points this season, he will be concerned by their recent form.

“We don’t have the points we want, that’s not the problem, that’s how it is,” Klopp said after Wednesday’s defeat. “We know what we want to do, we know what we have to do and we know about the football we want to play, so that’s all good.”

With the German now watching his Liverpool team slip down the table and with their only realistic chance of silverware coming in the FA Cup, he’ll surely be hoping he doesn’t go the same way as his old rival