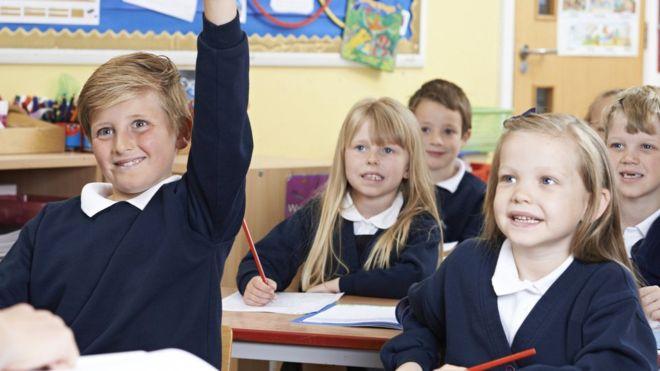 Girls start to see themselves as less innately talented than boys do when they are only six years old, a group of US researchers has said.

They said the “disheartening” results suggested the problem could snowball to affect future careers.

The study on 400 children, in the journal Science, initially found both five-year-old boys and girls thought their own gender was “brilliant”.

But then only one year later, gender differences had emerged.

The team from Princeton University, New York University and the University of Illinois said it appeared stereotypes were starting to show.

Suspected influences include exposure to media, teachers, parents and other children.

The study put sets of five, six and seven-year-olds through different experiments.

In one, the children were read a story about someone who is “really, really smart” but it is not clear who the story is about.

They then had to guess the protagonist from four pictures – two of men and two of women.

At age five, boys pick men and girls pick women around 75% of the time. But fast-forward a year to age six and boys are still picking men while girls are now slightly more likely to pick men too.

In another scenario, groups of children played a new board game.

Prof Andrei Cimpian, one of the researchers, told the BBC News website: “The message that comes out of these data is that young kids are exposed to the cultural notion that genius is more likely a male than a female quality.

“It’s disheartening to see these effects emerge so early. When you see them, you realise how much of an uphill battle it’s going to be.”

His research has previously looked at academic careers associated with needing innate brilliance in order to succeed.

It argued that the higher people rated the need for genius – such as in physics or philosophy – the lower the number of women involved.

“At five, six or seven you’re not thinking about a career, but soon you’re making decisions about what courses to take and what extracurriculars to take part in.

“Even if the difference starts small it can snowball into something a lot bigger.”

She told the BBC: “[Studies suggest] that everyone does better when hard work is believed as the key to success.

“In our studies, girls might be particularly impacted by the messages focusing on ‘hard work’ – they became equally interested in playing the game as boys.

“Thus conveying the importance of hard work to success could protect and even promote young girls’ interests.”

The UK’s Fawcett Society campaigns on the gender pay gap and argues early differences – blue and superheroes versus pink and princesses – is part of the problem.

Sam Smethers, the organisation’s chief executive, said: “This is a massive issue and it is holding us all, but particularly girls, back.

“Our research found that young women experienced gender stereotypes at school and from an early age.”