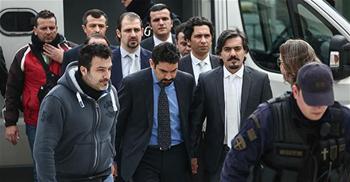 The Supreme Court of Greece on Jan. 26 rejected the extradition of eight Turkish soldiers who sought political asylum there after the failed July 2016 coup attempt, while issuing an arrest warrant in absentia, Turkey’s state-run Anadolu Agency has reported.

In addition, the court ordered that the officers – two commanders, four captains and two sergeants – be released from police custody.

The soldiers, who had previously stated that their life would be in jeopardy once extradited, will now await decisions on their asylum requests in the country.

Meanwhile, Zeki Arıtürk, a lawyer registered to the Istanbul Bar Association, told daily Hürriyet that the decision was final in legal terms while noting that the Greek Justice Ministry would have the last word as it could also extradite the soldiers.

The announcement of the final verdict had originally been slated for Jan. 23 but was later postponed to Jan. 26 when one of the judges had an accident while the other two did not convey a particular opinion on the soldiers’ extradition.

The decision came on the same day as senior Turkish and Greek diplomats gathered in Ankara to hold political consultations on bilateral ties.

The Turkish delegation, led by Undersecretary of the Foreign Ministry Ambassador Ümit Yalçın, held extensive talks with the Greek delegation led by Greek Foreign Ministry Secretary-General Dimitrios Paraskevepoulos in the context of regular political consultations. During the political consultations, the two delegations were scheduled to discuss bilateral relations as well as regional and international issues.

The soldiers, including two majors, flew their helicopters to Alexandroupolis on July 16, 2016, prompting Greek authorities to begin legal and diplomatic processes on charges of illegal entry into the country.

The case was then taken to the Greek top court after previous decisions to extradite three soldiers and not extradite the other five were contested.

Ankara had repeatedly demanded the swift extradition of the soldiers as the case had exposed often tense relations between Athens and Ankara, NATO allies at odds over issues from Cyprus to islets and air rights over the Aegean.