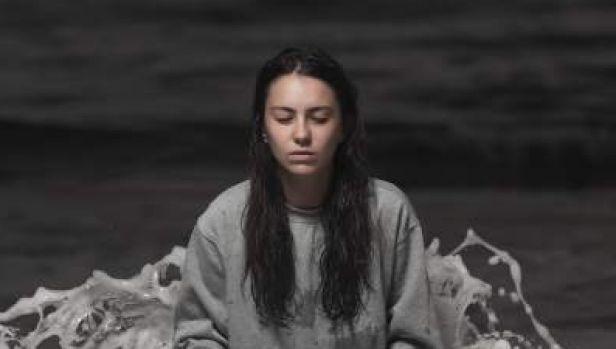 The opening chords to Amy Shark’s Adore are fairly distinctive.

And on Thursday, as Triple J counted down the Hottest 100 tracks of 2016 Ms Shark (real name Billings) definitely had her ears peeled for that chord progression. But as the countdown raced towards its conclusion she says she began to think perhaps she hadn’t made the cut at all.

“I had it blasting at 100 because I knew  it could be any number if it even made it at all,” she says.

Then the closing bars of Tash Sultana’s Jungle played and next up were those distinctive chords to Adore.

“When it started I just hit the ground,” she says. “I had a bottle of champagne in my hand, just in case, but I couldn’t open it because I was on the floor.”

She may have been the only music fan in Australia to be surprised by the track’s high placement in the countdown.

After initially placing it on Triple J unearthed in May last year, the track has really worked hard for her.

The ABC youth station originally added it to spot rotation before the programming boffins at the station realised they had unearthed a hit and gave it a full rotation, which meant regular airplay in the most listened to shows.

“I was really happy when it was on spot rotation,” she said. “That meant it got a few plays, which is nice.”

Suddenly she had record labels and managers courting her, encouraging the Gold Coast songstress to sign with them.

“It took me a long time to start putting a team together, sign a record deal, sign a management deal and so on,” she said.

Eventually she selected Wonderlick Entertainment, who have a partnership with Sony Music, and she was well and truly on her way.

Adore was written in less than 20 minutes, so cost-per-life-changing-moment is pretty low on this one.

It is a moving track about falling in love, and while she keeps tight-lipped about who the person is, she did say the person she wrote it about knows and they have discussed it.

“It’s that really special moment when you are at any age where you meet someone who you really like and you will do anything you can to see a lot of them,” she says.

“There is, obviously, someone in particular I was channelling when I wrote it.”

“Yeah, I guess we have talked about it,” she says before quickly moving on.

The song entered the top 40 when it was commercially released but failed to set the charts on fire.

Thanks to the Hottest 100 runner-up crown, it is now sitting on top of the iTunes Australia chart and will likely re-enter the ARIA charts next week.

But coming in behind uber-producer Flume in the highly competitive  list is definitely an early career highlight.

She is also aware she is the highest placed solo female artist on the chart, something she expects to see more of in the coming year.

“I’m not a big women’s rights girl boss person, but I think females in general have really showed up this year,” she says. “It has been incredible to see that and I’m a big fan of many of them.

“This year I think you are going to see a lot more awesome female artists coming out and because of that I think this year is going to be really female-dominated.”

The timing of her Hottest 100 success couldn’t be better with her debut headline tour announced straight after the countdown finished.

Less than 24 hours later shows in Sydney, Melbourne and Brisbane had already sold out.

Fortunately her promoters were smart enough to book multiple dates.

With just three tracks from her available at the moment, fans are eager for more and Shark promises there is more coming.

“There is an EP planned, I am flying to Melbourne today to do more recording,” she says.

And you will be able to hear even more of her on the tour.

“I have heaps of great ideas,” she says.

“I have been on tour with other bands but you only get to play for about half an hour.

“This way I will be able to play longer, do some cool lighting, tell some stories, I like that.”