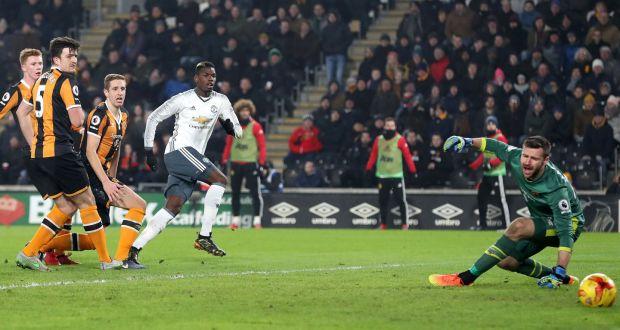 Manchester United are on their way to a second major final in two seasons, a Wembley showdown with Southampton on February 26h in the EFL Cup. Win and José Mourinho will double the trophy count of the post-Alex Ferguson era following last May’s FA Cup triumph under Louis van Gaal.

The Portuguese has won this competition three times before – all with Chelsea – though the passage to a fourth stab at it was no formality as United stuttered in this semi-final second leg despite leading 2-0 from the first leg. United’s complacency was summed up when Oumar Niasse made it 3-2 on aggregate with six minutes remaining to make the tie tighter than it should have been.

In a contest played in -1C Hull began well. Niasse beat a couple of United men and Phil Jones moved across and barged the number nine over. Out came Jon Moss’s yellow card and when Sam Clucas belted the free-kick at David de Gea, he had to use both fists to parry the ball away.

The soporific fare on offer reflected the score from the opening leg, as did the seven changes Marco Silva made, which indicated Premier League survival is the manager’s priority.

Silva’s side gave United a genuine fright on 26 minutes, though. Tom Huddlestone floated the ball into Michael Dawson and as the captain pulled the trigger an impressive Chris Smalling block was required. Niasse tried a follow-up shot and this was stifled, too.

Of the seven Silva switched from the loss at Chelsea, that of Ryan Mason, who suffered a fractured skull there, was enforced. While team-mates donned “Mason 25” warm-up T-shirts, the 17-year-old Josh Tymon and 20-year-old Jarrod Bowen were the manager’s most notable inclusions.

Despite those changes Silva still contended before the match: “We always believe in our capacity and want to improve our performance. We believe it is possible [to reach the final].” Yet given Hull’s position in the league, 19th and two points from safety, Silva’s main focus was revealed when he said: “It is clear for all that we have improved and I want more.The next stage is to do what is possible to improve in the transfer window.”

Mourinho, though, cannot have been happy at how space and ball were ceded to Hull before the interval, and United paid. On 34 minutes Shaun Maloney’s corner from the left, Moss adjudged Rojo to have tugged Maguire over, and the referee pointed to the spot. Up stepped Huddlestone to slot home calmly to De Gea’s right. If the penalty was debatable, a near-perfect instant response was about to come via Zlatan Ibrahimovic. The Swede ran at Dawson, fashioned half a yard of space, and let fly at David Marshall’s goal, the ball being turned away to safety.

When Moss blew for the interval Silva’s job was to urge his team to believe the shock was on and Mourinho’s job was to rudely wake his side.

When doing so the 54-year-old might also have informed the thus far anonymous Paul Pogba to become a factor, along with the rest of his misfiring front four. After the Frenchman went down in Hull’s area Moss waved away the penalty appeals though this did signal a rare United move of fluidity at the second half’s start. Ibrahimovic fed Rashford who did the same to Rojo. The defender slipped Lingard in behind on the left and his cross caused panic in Hull ranks.

Now came what appeared a genuine penalty for the visitors. Carrick pinged the ball to Smalling and Huddlestone pushed him over yet Moss – to Mourinho’s disgust – said no. This looked a far easier one to give than Hull’s. As long as Hull trailed by just the one United were in danger of being forced into extra time, at least.

As the match entered the closing 25 minutes this proposition seemed to recede as United finally forced the issue. A Rashford run took him into the danger zone and when Huddlestone got a foot in the ball went to Pogba, who made it 3-1 overall before Niasse’s late goal. Guardian service