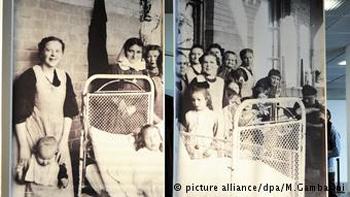 On Friday, January 27, the Bundestag will honor the hundreds of thousands of victims of Nazi “euthanasia” programs. The killing of those deemed genetically unsuitable was a prelude to the genocide of Jews and others.

The mass murder of the supposed physically and mentally unfit was a project central to Hitler’s thinking and the ideology of National Socialism. The Nazi leader translated ideas from the international eugenics and Social Darwinist movements of the early 20th century into a homicidal urge to cleanse the corpus of the German people from ailments and weaknesses. This obsession would cost the lives of more than 70,000 people in Germany and many, many more in countries occupied by the Third Reich. But those murders would not have been possible without the active participation of doctors, judges, administrators, scientists and others.

“So-called racial hygienists, for example, what we would call geneticists, were a point of interface between science and politics,” Maike Rotzoll, Deputy Director of the Institute for the History and Ethics of Medicine in Halle, told Deutsche Welle. “They tried to turn their ideas into political reality. And they were very successful.”

Hitler and the Nazis began pushing their eugenic agenda almost immediately after coming to power on January 30, 1933. By July of that year, the Hitler cabinet had approved the Law for the Prevention of Genetically Ill Offspring. It mandated the compulsory sterilization of anyone deemed likely to have children who would suffer from a broad range of conditions, including manic depression, deafness, alcoholism and “congenital imbecility.”

Imbecility, in particular, was an extremely flexible concept, and German courts were very receptive to applications made by doctors and health officials for the compulsory sterilization of others. Three-member panels at special Hereditary Health Courts approved 90 percent of such requests. 300,000 to 400,000 people, mostly from German mental institutions, were sterilized before World War II – about half on the grounds of “feeblemindedness.” Some of them were later put to death. Historian Hans-Ulrich Wehler called sterilization a “dry run” for the Nazi euthanasia campaigns.

From sterilization to murder

The start of World War II on September 1, 1939, added vicious momentum to an already horrendous attempt to weed out the allegedly unfit from the genetic pool. Those deemed ill no longer merely represented obstacles to the abstract idea of genetic “health.” They also consumed resources potentially needed for the war effort. School mathematics textbooks began asking questions like: “The construction of a lunatic asylum costs 6 million marks. How many houses at 15,000 marks each could have been built for that amount?”

“The murder of the sick began during the war,” Rotzoll said. “That wasn’t accidental. In war, human lives are worth less.”

In October 1939, doctors and nurses were told to transfer children they diagnosed with serious genetic ailments to special clinics that were, in reality, killing facilities. Led by Philipp Bouhler, the director of Hitler’s private chancellery, and Karl Brandt, one of Hitler’s personal physicians, this initiative was soon extended to adults. It was later called the “Action T-4,” after Tiergartenstrasse 4 in Berlin, the address of the office that recruited and paid those who participated in the murders.

By 1940, six euthanasia centers had been set up in various parts of Germany. 70,273 people were killed in them. The victims were poisoned, starved to death and in the later stages of Action T-4 killed in gas chambers that preceded the ones in Auschwitz and the other concentration camps. For that reason, the euthanasia program is often characterized as a “trial run” or “dress rehearsal” for the Holocaust.

“We can see the euthanasia murders as the first act of the Holocaust,” Rotzoll said. “The Nazis saw that they could carry out a logistically complicated operation without the protests becoming so heated that it had to be cancelled. And we know there were lots of connections to Action T-4. Jewish patients were among the first to be murdered. The method of killing – gas chambers – is another connection as is using showerheads to distribute the gas, although the gas was carbon monoxide and not yet Zyklon B. That was all tried out in T-4.”

As many as 100,000 people may have been killed directly as part of Action T-4. Mass euthanasia killings were also carried out in the Eastern European countries and territories Nazi Germany conquered during the war. Categories are fluid, and no definitive figure can be assigned, but historians put the total number of victims at around 300,000.

Action T-4 was discontinued in August 1941. It had elicited public protests, in particular from Catholics, who felt that euthanasia contradicted their religion. For a long time, historians wrote of Hitler being forced by public pressure to cancel the program. But Germany’s invasion of the Soviet Union in June 1941, also meant that many of the T-4 personnel were now needed in occupied Eastern Europe for ever larger campaigns of Nazi genocide.

“The killing personnel were later used in the concentration camps Sobibor and Treblinka,” said Rozell, who participated in a major research project and has co-authored a number of studies on euthanasia.

In the main, physicians and others who participated in the euthanasia murders did so voluntarily, sometimes even enthusiastically. While the general homicidal impulse originated with Hitler, Action T-4 is a classic impulse of what historian Ian Kershaw has called “working towards the Führer” – driving the murderous developments by anticipating and fulfilling the dictator’s wishes before he had even formulated them.

Historian Götz Aly has also assigned a high degree of blame to the families of the German victims, who failed to protect their relatives and sometimes approved of the murders. But others say that the situation was more differentiated.

Breaking the vicious circle of silence

For a long time in post-war Germany, those killed in the euthanasia programs were the forgotten victims of Nazi genocide. Families were reluctant to remember their dead relatives, perhaps because of shame at having failed to protect them, perhaps because of the stigma that continued to be attached to mental illness and physical handicaps. But over the years Germans –  historians and lay people – began to revisit the stories of the victims of this set of atrocities.

Author Sigrid Falkenstein, for instance, who was born in 1946, was shocked when she learned that her aunt Anna Lehnkering had been murdered in the Grafeneck euthanasia facility. That inspired Falkenstein to write a highly regarded book called “Anna’s Traces.”

“In my family, we never talked about my aunt,” Falkenstein told DW. “I now know that many families were and still are caught in a vicious circle of repression, silence and taboos. One reason was that the eugenic ways of thought, which stressed ‘racial hygiene,’ didn’t disappear with the end of the war. For a long time, victims, survivors and their families were stigmatized in both West and East Germany. By contrast, most of the perpetrators got off scot-free and continued their careers.”

In the aftermath of World War II, many of the doctors who bore responsibility for the killings received outrageously mild punishments or none at all. That injustice can no longer be rectified. What can improve and is improving is the willingness to memorialize the victims.

“My impression is that there has been a positive turn in the culture of remembrance concerning the victims of ‘euthansia’ and forced sterilization,” Falkenstein, who will speak in the Bundestag, said. “I got a lot of positive feedback from other affected families who were inspired by my book to research their own relatives. Perhaps I was able to contribute in a small way to making this subject more widely known.”

In 2014, a memorial to the T-4 victims was inaugurated at Tiergartenstrasse 4. And the Bundestag remembrance ceremony is another step toward giving the euthanasia victims their proper place in history.

“It’s a significant, perhaps a historical act – an act of belated justice,” Falkenstein said. “Perhaps we can learn something from it. The story of my aunt shows what can happen when we judge people by their value and usefulness and discriminate against them because they’re ‘different’ and don’t conform to some arbitrary norm.”