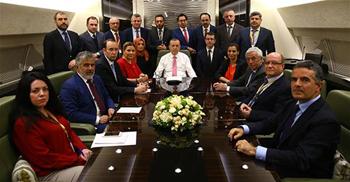 Having the referendum on charter amendments under the state of emergency may create a “comfortable ground” for the country, Turkish President Recep Tayyip Erdoğan has said.

Turkey is in preparations to hold the referendum in April, after lawmakers voted overwhelmingly in favor of the amendments on Jan. 21 in parliament, where two rounds of intense debates and major brawls between AKP and opposition deputies occurred.

The 18-article package, which seeks to shift Turkey’s governance from the current parliamentary system to an executive presidential system, will be put to the public vote officially after a final decision from the Supreme Election Board (YSK).

Erdoğan criticized the main opposition Republican People’s Party’s (CHP) decision to appeal to the Constitutional Court over the amendments approved in parliament, who blamed ruling Justice and Development Party (AKP) deputies of violating the parliamentary voting rules during the voting process. The CHP had also accused AKP deputies of using multiple votes during the voting.

“The only application door of the main opposition party is the Constitutional Court. They have never preferred to go to the nation. If you have been defeated [by the AKP] in parliament…why are you running to the constitutional court?” he said