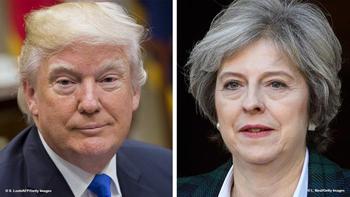 British Prime Minister Theresa May will be the first foreign leader to meet President Donald Trump. While this largely symbolic meeting is especially important for both of them, European leaders should pay attention.

That a new US president welcomes a British prime minister as his first foreign guest to the White House is nothing out of the ordinary given that both countries share a common history and traditionally tend to view world affairs from a similar perspective. That’s why US-UK ties have often been described as a special relationship – a designation that is generally given more importance in London than in Washington, particularly in recent years.

However, when the president who is playing the host is Donald Trump and the prime minister is Theresa May, then what would normally be a hardly noteworthy event becomes a more interesting story.

Trump not only publicly and controversially supported Britain’s exit from the EU, the so-called Brexit, but had also referenced his own surprising victory in the US presidential race as an American version of Brexit. May, meanwhile, won the difficult job of actually pulling Britain out of the EU. The US president and British prime minister are thus in a way bound together by what happened in the UK referendum on June 23, 2016, and in the US presidential election later that year on November 8.

“I think they both have so much incentive to have this meeting go well even if there is nothing substantive, that I expect the optics will be good and will look like a good meeting and a special relationship, which is what I think both will get out of this,” said James Goldgeier, a US foreign policy scholar who serves as the dean of the American University’s School of International Service.

And with Trump still in his first week in office trying to get his administration fully staffed and running, concrete decisions are unlikely.

What is expected, however, is that both leaders will declare their intention to negotiate a US-British free trade agreement – which again is in their shared interest. Trump had promised as much when he said that the UK would not have to wait at the end of the line for a trade deal with the US, as his predecessor Barack Obama had warned ahead of the Brexit referendum.

And for May, who has opted for a hard British exit from the European Union, getting not only a prominent reception in the Oval Office but also the assurance that the Trump administration is eager to do a new trade deal with Britain is extremely valuable.

“If Theresa May can show progress towards establishing these kind of bilateral trade relationships, that certainly makes Brexit looks less painful,” said Dan Reiter, a political science professor at Emory University in Atlanta. That is particularly true when the trade deal partner is not some minor country, but the United States – never mind that such an agreement is still years away, since Britain can’t sign any new trade deals before it has left the EU.

While the visit is therefore intended primarily for domestic consumption in Britain and the US, that’s not the whole story.

“It is symbolic, but it is also a little more than just symbolic,” said Theodore Bromund, a senior research fellow in Anglo-American relations at the Heritage Foundation, a conservative think tank in Washington.

“I think the US is likely to break with US post-World War II policy by having a ‘don’t-care-attitude’ about Brussels,” he added. Hosting the British prime minister charged with taking the UK out of the EU sends a strong signal of the importance the Trump administration assigns to Britain – and how it views the EU, which has strongly opposed a Brexit.

A laissez-faire attitude towards Brussels would already be a significant shift, since American support for a strong, united Europe and deeper European integration has been a traditional pillar of US foreign policy, regardless of who occupies the White House.

But May’s visit does not only contain a message to the EU, it signals something even broader than that, said Reiter. “The improvement of US ties with Britain is happening in the context of the reshuffling of the entire deck of countries around the world,” he noted. The visit, added Reiter, signals that Trump opposes the kind of globalism the EU represents for him and that he sympathizes with leaders that share his ideological worldview.

“The real question is whether he goes beyond simply thinking that the EU isn’t something worth supporting, which is one thing, but if he goes beyond that and starts supporting those in other countries who seek to pull their country out of the European Union or seek to create more nationalism in Europe,” said Goldgeier. “If he would do that, it would be very unfortunate for the United States and for Europe.”

For Heritage’s Bromund, Trump’s skepticism towards the EU “reflects the broader loss of American belief that this longstanding American policy is actually working very well.” Even Trump’s predecessor Obama, who opposed Brexit, was often regarded as Asia-focused instead of orientated towards Europe, he noted, while conceding the stark difference in tone and substance between Obama’s and Trump’s stances toward the EU.

Given Trump’s view of Europe, said Goldgeier, “it is going to be important for German Chancellor [Angela] Merkel when she first meets with Donald Trump to help him understand what Europe is, what her goals are and why Europe is important to the United States.”