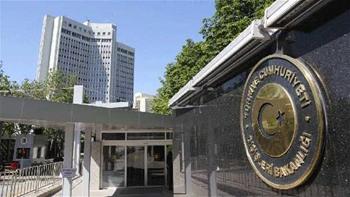 Turkey said it protests Greek rejection of Turkish demand of extradition of eight fugitive troops, vowing it will evaluate the impacts of this decision on different aspects of bilateral ties between the two countries.

“We protest this verdict that prevents these persons from standing before independent Turkish justice who have been actively participated in the coup attempt targeting at the democratic order in Turkey and the life of our president and that martyred 248 of our citizens and wounding 2193,” read the written statement issued by the Foreign Ministry on Jan 26.

This decision is another indication of Greece’s reluctance in fighting against terror organizations like the outlawed Kurdistan Workers’ Party (PKK) and the Revolutionary People’s Liberation Party-Front (DHKP-C) which target Turkey, it said.

It also described the verdict as a violation of international legal norms and principles, accusing Greece of protecting the coup plotters.

“Our initiatives for the extradition and prosecution of these criminals will continue through all legal means,” it said, urging that this politically-motivated decision will lead to a comprehensive evaluation on bilateral ties, cooperation on fight against terror and other regional and bilateral issues.