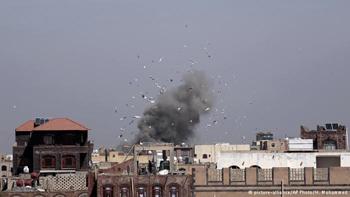 With millions of children “acutely malnourished” in Yemen, and most of the country lacking food, the Arab nation could face an all-out famine in 2017. A UN envoy also criticized Yemeni leaders for not discussing peace.

Over 10 million Yemenis require “immediate assistance to save or sustain their lives,” UN humanitarian chief Stephen O’Brien warned on Thursday.

The situation is especially dire among children, he added, with over 2.2 million of them “acutely malnourished” and a child under the age of five dying every 10 minutes of preventable causes.

Also, the 14-million-strong country could run out of wheat in just months, with supply chains crippled by the civil war that started in September 2014.

“If there is no immediate action, famine is now a possible scenario for 2017,” O’Brien told the UN Security Council.

The Security Council called on the warring parties to “allow safe, rapid and unhindered access” for aid, including food, and noted the “widespread and acute malnutrition on the verge of famine.”

In the past, the UN has repeatedly raised alarm over the fighting in the poorest Arab nation, sending out a special envoy, Ismail Ould Cheikh Ahmed, to mediate in the conflict between Houthi rebels and the internationally recognized government. However, with the Saudi military backing the cabinet and Iran allegedly arming the Houthis, the conflict has evolved into an arm wrestling match between two rival regional powers.

UN officials have accused both parties of hindering the delivery of aid. The Saudi-led coalition was also under fire for bombing the airport in Sana and the key Hudaydah port, in the country heavily dependant on imports.

“President Hadi continues to criticize the proposals without agreeing to discuss them and this will hinder and impede the path towards peace,” he told the council.

However, the Yemen’s UN Ambassador Khaled Alyemany restated that his government refuses to accept the Houthi “coup d’etat in any way or form,” adding that rebel leaders “must accept a restoration of “constitutional legitimacy” and Hadi’s presidency.

“Any other initiative or idea will be unacceptable and irrational because it will not bring about peace,” Alyemany said. “It will only bring about superficial solutions and the crisis will continue.”