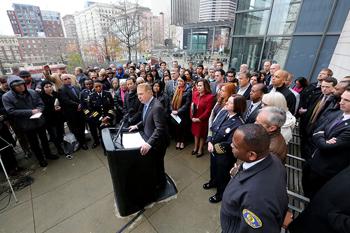 President Trump’s call for police to help crack down on illegal immigration might be seen as a clear nod to law and order. But many police aren’t seeing it that way. Patrik explores why things can look different from a beat cop’s perspective than from Washington. –Mark Sappenfield, National news editor

Enforcing federal immigration law “is just not what we do, which is why our policy will not change, even with the new Trump executive action,” says Captain Scroggin, a 32-year veteran, in an interview with the Monitor.

Scroggin’s view – which is supported by California’s attorney general – is pitting hard-earned policing knowledge and wisdom against Trump’s effort to crack down on “sanctuary cities.” In an executive order signed Wednesday, the president said cities would risk losing federal money if they didn’t commit their police to enforcing federal immigration laws.

But for many police officers, the executive order points down worrisome paths.

On one hand, they say, public safety increases when trust in police rises. Using local cops as immigration agents, they say, would shut the door on vast communities of immigrants, creating more opportunity for criminal activity, not less.

What’s more, they add, police are already being asked to do too much – adding immigration enforcement would only stretch them further.

Over both these concerns looms a fraught legal question: Should the government be able to essentially commandeer local police as federal agents? Some municipalities are already voluntarily enforcing federal immigration law, but Trump’s executive order would impose huge costs on those who don’t comply – challenging the rights of states and localities to set their own priorities.

For that reason and others, “Trump will face massive political resistance and challenges in the courts,” said Ingrid Eagly, a professor at the University of California at Los Angeles School of Law, in The New York Times.

The executive order directed the Homeland Security secretary to work with localities and states to enforce immigration law. Those that do not comply can be designated “sanctuary jurisdictions” and have their federal grants blocked.

Like many conservatives, Trump says undocumented immigrants with rap sheets are a fundamental threat to public safety, and sanctuary cities – which vow not to share immigration information with the federal government – are complicit.

“Sanctuary city policies are dangerous to citizens who are lawfully in this country,” Louisiana Attorney General Jeff Landry said, according to NBC News.

But numerous studies suggest undocumented immigrants are no more violent or unlawful as a group than US citizens are.

Caught in the middle are officers like Scroggin, who see the prospect of doing federal immigration work as antithetical to their vow of duty.

“We’re the melting pot of the world out here in California, there are a lot of immigrant communities that we serve, so we need to make sure that they feel comfortable” calling the cops for help, he says. “The most important thing we strive to do is to build enough trust so that residents provide information that makes this community safer. It’s a team effort.”

Most US police departments agree. Moreover, they suggest that many police departments already cooperate with the federal government. Even in sanctuary cities, police often notify federal authorities when they have an undocumented person in custody who has committed serious crimes.

The concern is that the executive order will remove police departments’ ability to focus on what they think is most important.

At this point, it’s not clear how much Trump could back up his threats. The president does hold sway over some grants but cannot redirect funding directly approved by Congress.

By one estimate, New York City could face $7 billion in federal losses if the city refuses Trump’s order. Or Trump could withdraw only funds that are attached to the federal immigration mission – a minuscule amount, by comparison.

Even Scroggin acknowledges that enforcement priorities in places like New York City and Los Angeles County could change if President Trump is able to hold back billions of federal dollars. But others say the issue is not just about punishing sanctuary cities but also persuading others not to join their ranks.

“This is not just a legal battle or a law enforcement issue – to a large extent it’s political, too,” said Jessica Vaughan of the Center for Immigration Studies, a think tank that favors protectionist immigration measures, to the Orange County Register. “The goal is not to go around whacking sanctuary cities. It’s to identify funding that can be cut off so that cities might be dissuaded from adopting those policies.”