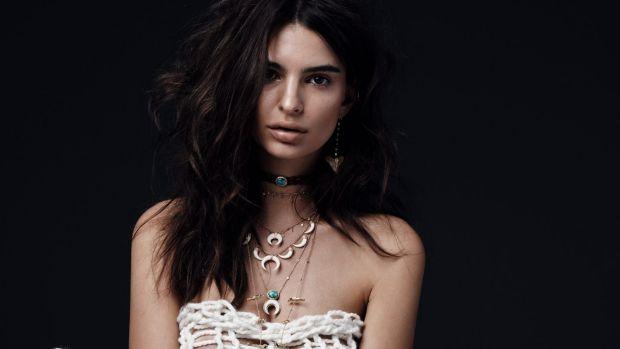 An unusually grey day in Los Angeles and, on a poolside terrace high up in the Hollywood Hills, Emily Ratajkowski is perched on a white sofa. An ominous layer of thick cloud blocks out the usually bright California sun but she optimistically removes her trench coat. Dressed head-to-toe in black – a cropped T-shirt and Ivy Park leggings, her face completely bare of make-up, she looks extravagantly beautiful.

You wouldn’t expect anything else. After all, this is the woman who, having been catapulted to fame by a nearly nude appearance in the video for Robin Thicke and Pharrell Williams’ controversial 2013 hit Blurred Lines, has gone on to appear on countless sexiest-women lists (among them GQ and Esquire), racking up more than 10 million followers on Instagram (her handle “Emrata” is now used interchangeably with her name).

But if she’s flattered by the attention her beauty has attracted, she’s also alert to its complications. “It’s an interesting paradox,” she says, in her soft, lilting Californian accent. “If you’re a sexy actress it’s hard to get serious roles. You get offered the same thing that they’ve seen you in. People are like sheep and they’re like, ‘Oh, that’s what she does well.’ What’s so dumb is that women are 50 per cent of the population and they want to spend money to see movies where they’re portrayed as three-dimensional characters.”

Ratajkowski (it’s pronounced Rat-a-kow-ski), turns out to be far more outspoken than most up-and-coming stars. During our time together, the conversation takes in everything from the Hollywood “boy’s club” to the US election. “The truth of the matter is no one wants to hear me talk about this stuff. Definitely the men who are casting films don’t want to hear it, but I just can’t not – I’m angry,” she says, pushing her hair out of her eyes. “It’s important to me.

Fiercely intelligent, Ratajkowski, 25, was born in London to two academics – her father, John, was an art teacher, and her mother, Kathleen, an English professor who was in the UK teaching on a prestigious Fulbright scholarship.

The family returned to the US when she was five. Growing up, Ratajkowski’s mother instilled in her the importance of being recognised for more than her looks. When people remarked that she could have a career in modelling, “my mum said, ‘No, she’ll be a brain surgeon,’ because she didn’t like the idea that I would think that [my appearance] was the only thing that I was going to be valued for.”

At the same time, “She always told me never to feel sorry or apologetic or embarrassed by my body, to never apologise for my sexuality.”

As it happened, Ratajkowski signed at the age of 14 with Ford Models in LA, landing assignments for US magazines, doing “tweenie kind of stuff”. Initially, she “didn’t think of it as anything more than a fun activity and an opportunity to make money, to buy the shoes I’d been dying for and to put money away in a savings account”

At school, though, having gone through puberty at the age of 11 or 12, her looks were causing her problems. “I started to realise that I was being perceived differently. It was confusing. Basically it was more about the way that people had a problem with a girl looking like a woman because it confused them, it made them feel uncomfortable and I think there was a lot of guilt that they wanted to induce.”

Later, at the high school in San Diego where her father taught, there was a group of “older mean girls who would say, ‘Here comes the daughter of the painting teacher … and she models.’ I guess it was jealousy,” she says. “It was like ‘you should be a part of this group of popular girls’, and I didn’t want to be. They had sex, and boyfriends, and I was 14 and barely knew anything.”

Aged 18 she enrolled at the University of California, Los Angeles, to study fine art but dropped out after a year and returned to modelling, shooting for magazines and appearing in music videos, before eventually being cast in Blurred lines. The video featured her and two other models dressed only in g-strings, dancing with Robin Thicke and Pharrell Williams, both of whom were fully clothed.

According to Ratajkowski, “Like any art, there’s a million ways to interpret it. All I can say is that when a woman is naked, that’s not immediately antifeminist. I have no apologies for it, and I’m not ashamed at all.”

Like her mother, she’s a committed feminist and is currently reading Vagina by Naomi Wolf. “Every woman, whether or not they’re comfortable with the term feminist, probably wants to be equal to men and that is fundamentally what feminism is about. I think that there is a stigma attached to the word, but to me it means talking about the way we look at women and how we judge women differently to the way we judge men. It’s also about paid maternity leave, equal pay for women …”

It’s her feminism she draws on when discussing the furore around her naked selfie with Kim Kardashian. The saga began last March when a UK columnist, Piers Morgan, criticised the reality star for posting a nude selfie, prompting Ratajkowski to tweet: “Love when a man comments on a woman’s decision to post a nude photo. Her body, her career. Sexist bullshit.”

Now she says: “[He was] talking about the fact that Kim is 34 and a mother and that we’re over seeing her in a sexual light, which I had a lot of problems with. He also implied that her husband [Kanye West] was writing her tweets, as if she isn’t capable of writing them herself, which to me is incredibly sexist.

“There are lots of [criticisms] I can understand one might have about the Kardashians and reality TV,” she adds, “but even someone who you might be critical of is allowed to post a naked selfie if she wants to.”

In the aftermath, “Kim was kind enough to send me flowers,” says Ratajkowski. “Then we decided to do a selfie with our tops off, flipping off [sticking up her middle finger] at the camera, which I think speaks for itself,” she laughs. “I tweeted about what the idea was behind how women need to have a space to be sexual.”

Morgan fired back on Twitter, pronouncing, “Feminism as it was intended is dead,” and calling them “tacky”.

“He criticises everyone,” says Ratajkowski. “I think he’s also really attention-seeking. It’s the Trump phenomenon. If you keep saying controversial things, then you keep trending on Facebook and that’s great for some people’s careers.”

Perhaps – but her career, at least, seems to be blossoming of its own accord. Despite the lyrics being slammed by critics as “rapey”, Blurred Lines became the most downloaded music video of all time and Ratajkowski has steadily built up an impressive CV since, combining credible film roles with modelling. She was Andie, Ben Affleck’s mistress in Gone Girl in 2014, and in 2015 played Adrian Grenier’s love interest in the Entourage film. She will spend the northern hemisphere summer in London filming In Darkness, a taut psychological thriller from Irish director Anthony Byrne.

Off screen, she lives in a loft in downtown LA and for the past two years has been in a relationship with Jeff Magid, a former professional poker player from Boston now working on his first album as a singer-songwriter. (“He sounds a bit like Outkast,” says Ratajkowski.) They met through mutual friends and she’s clearly besotted. “He’s a really confident person, he loves women, he’s brilliant and charming,” she beams.

She’s become friends with Lena Dunham and wrote a powerful essay on the subject of sexuality for Lenny Letter, Dunham’s feminist newsletter. “To me, ‘sexy’ is a kind of beauty, a kind of self-expression,” she wrote, “one that is to be celebrated.” A huge fan of Dunham, she says, “I would love to be a part of anything that Lena’s doing. She’s incredibly warm and sweet and has a lot of energy, in a really positive way.”

Ratjkowski’s mix of intelligence and sex appeal has captivated the fashion industry. Carine Roitfeld put her on the cover of CR Fashion Book in 2013. She’s since modelled in dozens of glossy editorials (in Love, American Vogue and W among others) and modelled for Miu Miu and Marc Jacobs.

“It’s great, especially when you work with really great photographers, and when it’s a partnership on a work of art,” she enthuses. “Being a friend of Marc’s is amazing, he’s a wonderful, vivacious, cool person.” In turn, Jacobs has described Ratjkowski as “sexy in that I totally get it sexy way”.

Collaborations like that are helping her establish herself as brand ‘Emrata’. “I didn’t necessarily intend it for myself, but it just happens with Instagram and Twitter; people come up to me and call me Emrata, they don’t call me Emily,” she says. “That’s my brand, my identity.”

It is one that she doesn’t take lightly. Intent on “using my public persona for good causes”, and continuing to be “active politically”, she shares her philosophy on life: “It sounds really clichéd, but just be true to who you are.” Given her track record, there is no danger of her doing anything else.