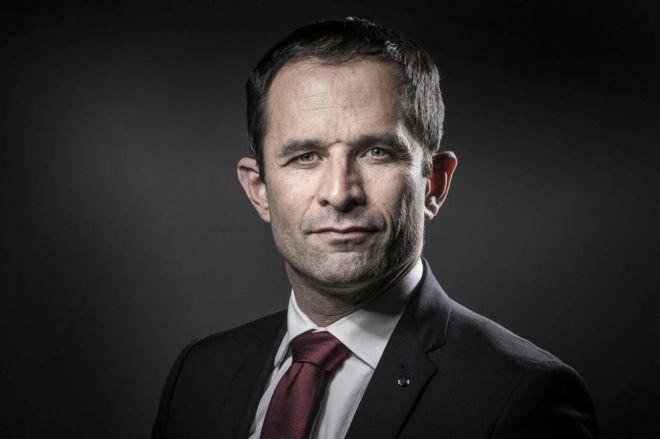 Benoit Hamon will be the French Socialist Party’s candidate in the presidential elections in April, after winning a run-off vote on Sunday.

The ex-education minister comfortably beat Manuel Valls, a former prime minister, who conceded before the final tally was completed.

The Socialists are not expected to do well in the election.

After his win was announced, Mr Hamon said: “Despite the differences, the forces of the left have never been so close in terms of ideas. Let’s come together.”

He called on the Socialist Party, independent left-winger Jean-Luc Melenchon, and a Green candidate to unite and “construct a government majority”.

Mr Hamon, 49, was the most left-leaning of the seven initial candidates in the Socialist race, the first round of which was held last week.

He has experienced a surge in popularity from a range of progressive plans, including a proposal for a universal monthly income for all citizens.

He also wants to legalise cannabis, and ditch the labour law passed last year that made it easier to hire and fire.

Anyone was allowed to vote in the primary, even those who were not party members.

Organisers said the turnout was much higher than the previous week, when 1.6 million people cast ballots.

However, there have been reports of mismanagement, with one reporter from news site Buzzfeed saying she had been allowed to vote four times in the second round. She said she voided her ballot so as not to affect the outcome.

Journalists from Le Monde newspaper also claimed they were permitted to vote more than once in the first round.

Mr Valls had built his campaign on his experience gained as prime minister between 2014 and 2016.

The presidential race has taken a turn in recent days, with the favourite for the post, Francois Fillon, becoming embroiled in a controversy over payments to his wife for political work – which a French publication claimed there was no evidence she carried out.

Mr Fillon denies the allegations, and said he would drop out of the race if there was enough evidence to launch an investigation.

On Sunday, Mr and Mrs Fillon were side by side at a Paris rally that sought to reinvigorate his candidacy.

“Leave my wife out of the political debate!” he said in his speech, provoking rousing applause from supporters.

Mr Fillon’s scandal could potentially be a boost for Marine Le Pen, the anti-immigration hardliner who has pledged to put “native” French people first.