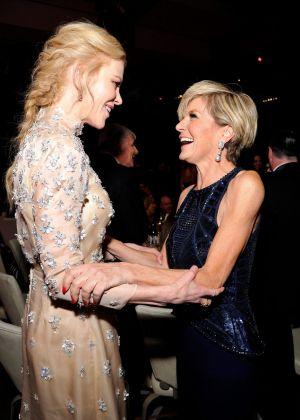 Australia’s stars, lubricated perhaps by the fermented fruits of the Barossa, shone bright and poked and praised each other at the G’Day LA Gala in Hollywood.

“Here I am barefoot and ready to talk,” Nicole Kidman, who presented costume designer Martin with a lifetime achievement award, told the guests at the Dolby Ballroom in the complex that will host next month’s Oscars.

Kidman praised Martin for transforming her into the beautiful lead of their hit film, Moulin Rouge.

“You gave me boobs – big cleavage – something I had always wanted.

“You covered me in jewels.”

Kidman and husband Keith Urban met at the 2005 G’Day gala and have been regular visitors since.

Hill, with Kerry Packer, transformed the way cricket was broadcast, then with Rupert Murdoch changed the way the NFL, NASCAR and other sports in the US were aired.

“According to the Trump White House there are 17 million people here tonight – largest audience ever,” Hill told the audience of about 300.

“I am a former Mr Universe, a former Nobel Peace Prize winner and I’ve just turned 32 and I love alternative facts.”

Mendelsohn was presented with an excellence in film and TV award from Gareth Edwards, his director on the latest Star Wars blockbuster, Rogue One.

Edwards joked how Mendelsohn had really made it because Target sells socks with his face on it.

The English director then pulled up his pants to show Star Wars socks with Mendelsohn’s face on them.

The G’Day USA, in its 15th year, is Australia’s premier public and economic diplomacy program in the US promoting Australian trade, tourism, film, food, wine and other business.

It is produced by the Australian Department of Foreign Affairs and Trade, Tourism Australia and Austrade.